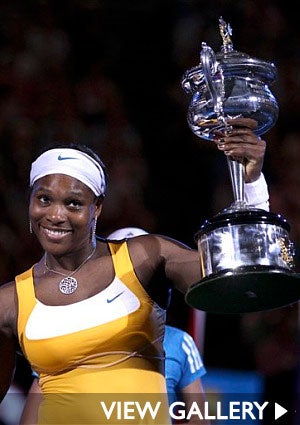 Slammin’ Serena Williams is back on top. After winning the Australian Open doubles with her sister Venus yesterday the five-time Open champion beat Belgian Justine Henin following an intense two-hour match in Melbourne, Australia. This is also Serena’s 12th Grand Slam win. tying her with American tennis legend Billie Jean King. “Billie, we are tied, so I’ve reached my goal,” Serena told King who was on the stands. Despite losing the second set and first game of the third set, Serena defended her way to the top. “I thought I just got to man up, this is my chance, no matter what I just have one more set,” she told reporters afterward. The elated champ went to the players box to kiss her mother Oracene Price and sister Venus in the player’s box, yelling “Whew” into the crowd. Congratulations Serena.