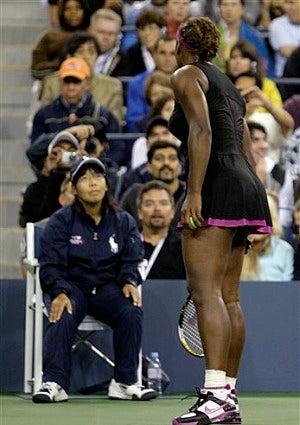 Tennis great Serena Williams was fined a record $82,500 for yelling at a line judge during a heated tennis match at the US Open and they have warned that she could be suspended from that tournament if she has another “major offense” at any Grand Slam in the next two years.

Until this record ruling, the highest amount fined was about $48,000 to a yelling male tennis player who walked off the court in 1995 and whose wife, reportedly, added injury to insult by actually slugging the line judge. To be sure, the first images of the normally composed Serena, yelling at full tilt were certainly disturbing to viewers who have marveled over the years at her cool and her grace. I certainly trust her to know what judgments  to expect during the course of a championship tennis game. That being said, I’m wondering about the deeper root cause of our communal disturbance over her response.

Were we, in those first few moments, genuinely concerned for Serena’s distress or were we more fearful that her outburst could shatter fragile perceptions about professional decorum and Black people? I’m also wondering what was so distinctively off putting to the US Open about Serena’s outburst that they ruled that it required a financial sanction that is nearly double what anyone has ever been fined for yelling before. Apparently it is unthinkable that successful Black women, in modern times would have the temerity to yell from the gut in defense of their own interests and the US Open wants double money to make doubly sure that we get the double message that high profile women should be widely seen but not loudly heard.

Supposedly, it makes people way too uncomfortable when Black women turn up the volume or act out of expected form, for any reason; therefore, the modern lesson is that we should serenely hold our peace, if we want to maintain our provisional hold on acceptance in this society. When we don’t maintain the pose, and are caught in the act of passionately defending our point of view we are called angry Black women. The stereotypic language alone effectively separates us from other “yelling women” and serves to make our anger seem somehow less legitimate. Other yelling women who stand up for themselves are called courageous. Yelling men who stand up are called strong.

The images in real life and art tell the same story over time. League Of Black Women does leadership research and educational programs for Black women in America and we note that the late great, Eartha Kitt spoke her candid peace, when asked her opinion of the Viet Nam war at tea at the White House. First Lady Bird Johnson reportedly cried in shock and Eartha was effectively blacklisted. In “The Color Purple,” Sophia yelled her audacious refusal to be pressed into servitude and was beaten and jailed. Black women in all kinds of work settings are routinely cautioned against showing any outward signs of pride or offense, no matter what unfair provocations they are facing. White women are cautioned against crying. Black women are effectively muzzled and told to watch our mouths.

There’s a noisy new wind blowing and I believe that it is bringing back the full range of Black women’s voices, including the power of our high volume sound and the fury.

While we are generally peace-loving women, surely we now know that not every challenge can or should be met with moderate tone and folded hands. There are times in the challenge of change when, in our defense, our words should be delivered in deafening surround sound. Legislators who are still opposing health care reform need to hear directly from us. Banks that drag their feet with completing desperately needed home loan modifications, need to be called out. Bobble head employers who still impede leadership opportunity for black talent, yet fattened their reserves by using the economic crisis as an excuse to cause African Americans to bear the brunt of the nation’s unemployment crisis, need to be recalled, by us.

The “Washington Post” reports that the jobless rate in some age categories equals black unemployment during the Great Depression. It’s also more than three times the percentage of the general population. Meanwhile, Northeastern University Center For Labor Market Studies reports that African Americans who graduate college endure joblessness at double the rate of white college grads. These are the issues that should get us fired up with our hands flying from our ample hips in purposeful and artful articulation before the stunned faces of shocked social adversaries who thought we’d just meekly take it… again. Therefore, in this vivid instance of her demonstrative outrage, I’m standing in awe and understanding for Serena’s choice to bring this not so serene version of herself. She took the big double dare of resistance, wrote the big doubly punitive check and sent a powerful message of self advocacy across the net and across the world.

For more information about League of Black Women


The views and opinions expressed in this commentary are solely those of Sandra Finley and do not reflect those of ESSENCE or ESSENCE.com.