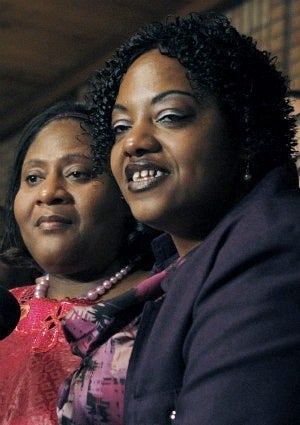 In 1993, Jamie and Gladys Scott were sentenced to double life sentences in prison because of their roles in a Forest, Mississippi armed robbery that netted only a few hundred dollars. For years, critics of the case have cited the extreme nature of the prison terms handed to these two Black, lower class women who had no prior criminal history.

A 1996 appeal made to the Mississippi Court of Appeals was unsuccessful, as were subsequent appeals made to the United States Supreme Court and a petition made to Governor Haley Barbour in 2006.

Until late 2010, the Scott Sisters’ case wouldn’t have been much different than many of the other Black women who are currently serving time in American prisons According to a 2008 Pew Public Safety study, 1 in every 279 Black women is incarcerated; that’s significantly greater ratio than the 1 in every 1,064 White women and one in every 658 Latinas.

While most stories will never garner any significant media attention, Jamie and Gladys are hardly the only Black women to have received poor legal representation (their attorney was disbarred two years following their conviction), questionable prosecution (one of the young men involved in the robbery admits to having been convinced to take a plea deal that implicated the sisters after being told he would be sent to a prison where he would be raped) or severe sentences.

What is, however, unique about the Scott case is the 2010 turn of events which saw both women released on suspended sentences by the order of Governor Barbour. The conditions of their release? Gladys must donate a kidney to Jamie, who requires dialysis. The Governor stated that “The Mississippi Department of Corrections believes the sisters no longer pose a threat to society.” He chose to suspend the sentence after the Mississippi Parole Board recommended that he did not pardon, nor commute the sentences of the two women, but did suggest that he grant an “indefinite” suspension of sentence.

While there is something powerful about the bond between these two sisters — the inextricable linking of their lives from birth, to their unfortunate choice to participate in the robbery and, now, the opportunity for them to start life anew, it’s heartbreaking to think that the only reason the Scott sisters have been released is due to Jamie’s health troubles. How many other Black women are languishing in prison for life after committing crimes that would have yielded their White peers a slap on the wrist?

As the two women work to adjust to life outside of prison, Jamie is also facing the challenge of losing 100 pounds in a year in order to be physically ready for the potentially life-saving surgery. Gladys will also need to lose a significant amount of weight in order to be a donor. In a recent NPR interview, Gladys was asked about the possibility that her kidney may not be match, to which she responded: “I’m not looking at that. I’m having faith in God that I am a match for my sister.”

Hopefully, the love between these two women can help sustain them as they take on the task of starting over, getting healthy and using their testimonies to help prevent young women from sharing their fate. “Five years from now, I hope that I’ll be going around to different colleges, and different schools…telling my testimony” said Gladys told NPR. “And (I see myself) going back to school (to) be a counselor.”

Jamie looks forward to better health and “getting this surgery done, being able to live without a machine. (I want to) talk to trouble teens and try to help give back to those who gave to me.”

Jamilah Lemieux writes about race and culture on her blog, The Beautiful Struggler.

For The Love Of The Game: These Female Pro Football Players ...