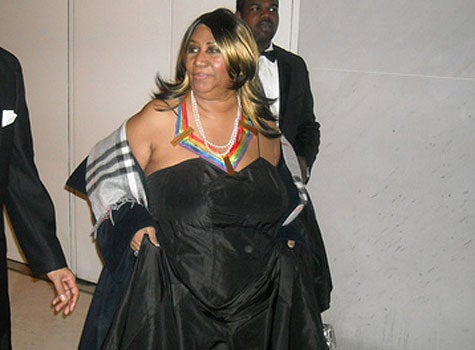 I had another one of those “only in D.C.” experiences last night, at the 32nd Kennedy Center Honors. The annual award honors lifetime achievement in the performing arts, specifically recognizing individuals who have defined American culture. This years honorees were African-American opera singer Grace Bumbry, actor Robert DeNiro, writer/director/producer Mel Brooks, jazz pianist and composer Dave Brubeck, and singer and songwriter Bruce Springsteen.

At a White House reception just before the show, where the President paid tribute to the honorees, he said, “These performers are indeed the best. They are also living reminders of a simple truth–and I’m going to steal a line from Michelle here–the arts are not somehow apart from our national life, the arts are at the heart of our national life.”

The performers at the Kennedy Center Honors are always kept a secret until the show is in progress. So every act–Herbie Hancock on piano during a tribute to jazz great Dave Brubeck, Aretha Franklin speaking movingly on the trailblazing opera career of Grace Bumbry (who, at 23, debuted in 1960 at the Paris Opera, trouncing critics who disapproved of a Black woman onstage), and Sting covering Springsteen (and getting a tuxedoed and ballgowned audience up on their feet)–was a surprise.

Being there in person was pretty incredible, but check out the two-hour televised version on CBS on December 29!