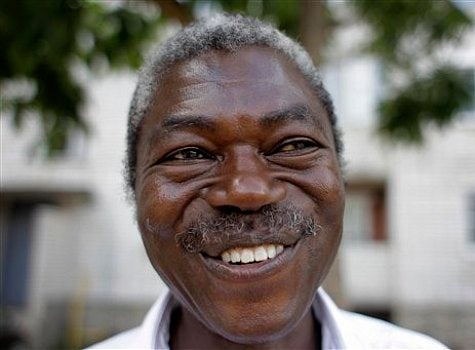 At first people would stare at the only Black man living in the small village of Novozavidovo, 65 miles outside of Moscow. Now they see West African native Jean Gregoire Sagbo as one of their own. So much so that they elected him as one of the town’s 10 municipal councilors, reports the Associated Press. “His skin is black but he is Russian inside,” says mayor Vyacheslav Arakelov. “The way he cares about this place, only a Russian can care.” To many in the village of 10,000, Sagbo is an honest politician who has worked hard to better the impoverished town he has called home for the past 21 years. Among his plans, the 48-year-old says he wants to focus on cleaning up a polluted nearby lake, reducing drug addiction, and providing families with heat in the brutal Russian winters. “Novozavidovo is dying,” Sagbo tells AP. “This is my home, my town. We can’t live like this.” Sagbo has always been known an enthusiastic member of the community who organized volunteers to start an annual day of collecting garbage in the village. Call him a community organizer, much like President Obama, to whom he has been compared, though Sagbo doesn’t welcome the comparison. “My name is not Obama. It’s sensationalism,” he says. “He is Black and I am Black, but it’s a totally different situation.” In a country known for rampant racism, Sagbo says he doesn’t experience it in his daily life. “I am one of them. I am home here,” he says. A native of Benin, Sagbo first came to Russia in 1982 to study economics. He met his wife, a Novozavidovo native, and decided to move to the village to be closer to his in-laws. He now has two children and works in real estate sales. The municipal job is unpaid.