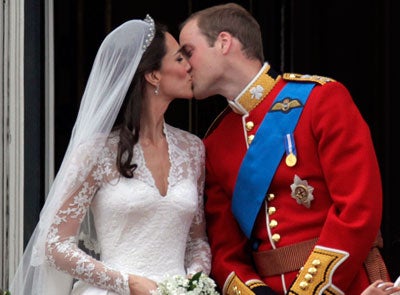 Like tens of millions of women around the world last Friday, I awoke at 4:30AM EDT to watch the Royal Wedding between Prince William of Wales and Ms. Catherine Middleton of Buckleberry, England.

I would not have missed it for the world. The pomp, the pageantry, the romance, the Queen of England, and a chance to watch two young people in love start their lives together as man and wife at a ceremony performed by the Archbishop of Canterbury in Westminster Abbey no less.

After all, how often do we get to see a real live Prince — tall, handsome and gallant in his military uniform, waiting to marry his Princess in front of two billion people, and then ride off (literally) into the sunset in a horse-drawn carriage as throngs of adoring crowds wave and line the streets?

As I sat in my PJs, snuggled up in bed with my cup of coffee, and my BlackBerry, I was amazed at how some of our most admired sister celebrities and journalists were also awake watching, and tweeting. And much like me, they were acting like a little girl at a slumber party; giggling, pointing, and swooning over the modern day fairytale come true. Every little girl wants a prince, every little girl wants to live in a castle — it is how are are socialized as girls.

And then it hit me: I had seen this movie before. First in my favorite childhood fairytale starring Cinderella, and then in 1981 with Princess Diana’s marriage to Prince Charles of Wales, heir to the British throne. I was 12 at that time. I remember we had a sleepover at my house; mom made us some crumpets and tea and we watched in awe as Lady Diana Spencer got out of the carriage with her 25-foot train and walked into our hearts as the People’s Princess for all time.

Reality Check — The Princess Di saga reminds us that fairytales are not sustainable — that a good marriage cannot be based on fantasy, and that love alone does not conquer all. And that when we are not true to ourselves, and do not choose the right partner for us, we often end up with heartbreak, and in Diana’s case, tragedy.

As I watched the tweets go by, I read one from a sister we all love and admire that said although she loved the wedding, she could not help feel that such a love would never happen for her. I saw a lot of such tweets and I started writing this piece in my mind because I think it is important that we as Black women stop wishing for a “fairytale prince” and engaging in unhealthy fantasies about what true love and marriage are all about. Of course, it will not happen to you or me. It won’t happen for 99.9% of women on the planet. Catherine Middleton was the exception; she is not the rule, sisters.

Take Away #1: Stop looking across “the pond,” as the Brits like to say, for fairytale marriages and start looking right within our own community to see healthy, happy, loving, lasting marriages. Three examples come to mind: Barack & Michelle Obama, General & Mrs. Colin Powell, Bill & Camille Cosby. Of course, I could mention Denzel and Pauletta, Will & Jada, Chris and Malaak Rock, and many many more. My maternal grandparents had a great, long, 54-year marriage with 11 kids. These people are the ones we should be emulating and studying to see just what it takes to make love, romance, and a marriage last through the years, not a royal family of people who do not share our history, our values, or our reality.

Take Away #2: All that glitters is not golden. The fantasy wedding between Princess Diana and Prince Charles was a sham. Ironically, at his side, during the marriage of his eldest son William last Friday, was not Princess Diana, but “that woman,” his wife, Camilla Parker Bowles, now the Duchess of Cornwall. Charles loved Camilla always. But the Queen felt she was not suitable, so Charles, as heir to the throne, did his “duty” at age 32 and married a 19-year-old virgin name Lady Diana, daughter of Earl Edward John Spencer.

My point is this, sisters: you can find true love, romance, and companionship. Your prince may be the nice brother you see on the subway each morning headed to work. Or he may be the fine white boy who you often see at the bookstore on weekends. Maybe he is that old, dear friend you have always known and loved, but never thought of as a life mate. Princes come in many forms, and in many colors. The key is to do what Catherine did and get to know him, invest time with him, learn him as your best friend, get to know his family, know what you are in for if you marry him and most importantly take care of you and your dreams along the way.

I believe Catherine and William will make it for the long haul, because their union is based on nine years of friendship, laughter, courtship, trials, mutual respect and love. Reality, not fantasy, is what makes a good relationship last.

Part II of this series — Why do we date and marry anyway? — will run on Thursday.

Sophia A. Nelson is the author of the forthcoming book, “Black Woman Redefined: Dispelling Myths and Discovering Fulfillment in the Age of Michelle Obama,” will be in stores May 31st, 2011. See the June issue of Essence for a feature on the author and book.