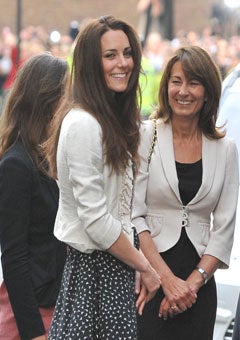 Many of us single girls, particularly us professional girls in GEN X & GEN Y who make up a new phenomenon of “Never Marrieds,” often marvel at our girlfriends who have it all. Husbands, kids, great careers, great personalities, great faith, and great success. They seem to do it with such ease and grace, just like the Duchess of Cambridge, Princess Catherine of Wales.

When one digs beneath the surface and actually engages these wonder women in conversation, what comes to light is that they had a “strategy.” In one of the essays in my forthcoming book, “Black Woman Redefined,” CNN Special Correspondent Soledad O’Brien pens a short bit of wisdom to young women about how she “got it all.” She is very clear that she had a strategy about the kind of man and marriage she wanted. She admonishes women to not let their careers be the center of their lives, and instead, just as they pursue career success, women must pursue relationship success.

I cannot agree more with this strategy, looking back as a woman in her mid-40s. I only wish someone had told me this when I was in my 20s.

Still, rumors abound in England about how “commoner” Catherine Middleton of Buckleberry landed the heir to the British throne as her husband. Word is that her mother, Carole Middleton, was the one with the plan. Supposedly, when Mrs. Middleton found out that Prince William was headed to St. Andrew’s college, she sent Catherine off to be there, just in case. Some have accused Carole Middleton of being a “social climber” — a girl from the British middle class that is now the mother of the future Queen of England. When Kate and William were courting on and off at college, and when they broke up — it is Kate’s mom who told her to “stop moping around” and to “get out and show William what he was missing.” Kate followed suit, and well, she eventually got her man to propose.

So what are the takeaways here for sisters?

Takeaway #1: Have a Plan: Whatever the facts, we know that in the end, Catherine, a commoner, who was not bred to marry a king, now is the wife of one (or one who will be King). This did not happen by accident. One of my mentors, who has been married for over 30 years, told me that we need to put ourselves in places where we will meet the kind of man we want to marry and build a life with. I find that so often, we as Black women are so driven on our career success and educational achievements, or in just trying to “make it” in the world, we are too tired to go out, too tired to dress up, too tired to catch a good man. I know this has been true for me. The bottom line is that you have to put effort, and yes, strategy into finding the right mate for you that shares your life vision, values, and dreams.

Takeaway #2: Marriage is About the Family: We have all been to weddings and we have all heard the exchanging of vows. But something that the Archbishop of Canterbury said at the royal wedding ceremony struck me: “Marriage is intended to be a way in which man and woman help each other to become what God meant each one to be; their deepest and truest selves.” YES! That is it, folks. Life is not meant to be all about YOU or ME. Life and the continuation of the human species is about building love, support and families. Again, I look at the Obamas. The President and First Lady have left a legacy for their girls, who will one day marry and have children of their own. We have to start redefining how we value relationships. Every study there is, including the one I commissioned for my book, tells us that marriage makes us more financially sound, wealthier, healthier and happier. It also connects us to a “family” of our own.

My point is this sisters: Nothing in life comes without a plan and hard work. Today we treat people and relationships like Dixie cups. We dispose of them at will. But as we can see the results, particularly in the Black community — of hook-ups, jump-off, single female heads of households and the like — have been disastrous on the health of the Black family.

Catherine Middleton may be a young White woman from a privileged background. Her mother may be a social climber. But at the core, her mother had a vision for her daughter that included not just doing well in college and in her career, but more importantly in her relationship with a man. Her mom coached, prodded and strategized, and the end result was a daughter who has a great education, a spirit of independence, and who has now married a wonderfully handsome, gentle and caring man, who loves, respects and admires her, and oh, who is also the future King of England.


Part III of this series: Will run on Friday, May 6th.

Sophia A. Nelson is the author of the forthcoming book, “Black Woman Redefined: Dispelling Myths and Discovering Fulfillment in the Age of Michelle Obama,” in stores May 31st, 2011. See the June issue of Essence for a feature on the author and book.