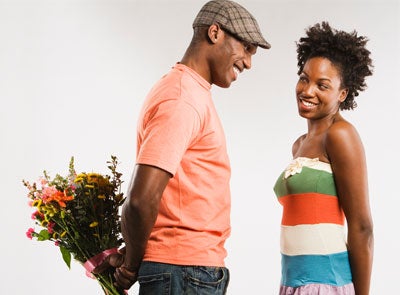 Picture it: me (in heels) and an attractive guy about my age stand on the platform of the subway station.

The unfolding plot: In a train car full of chaos, a lone seat opens up to offer comfort, stability and sweet foot relief to one lucky passenger. Across that crowded vessel he — the beautiful chocolatey man with locs — and I, the less-than-graceful sista girl, simultaneously spotted the opportunity to sit.

I was a little closer, but four-inch stilettos ain’t the kind of shoes that allow most of us to pivot, turn and break into an effortless sprint (unless you are in fact Beyonce Knowles), so although space and distance were on my side, he beat me to the punch.

He grappled for a moment, avoiding my eyes, which surely by now were pimp-smacking him into submission, then proceeded to bend his long, lanky, designer-suit-wearing legs and park his narrow rear in the open seat. The punctuation mark on his bold move of unmanliness? He crossed his leg. I had officially been served. I don’t mind telling y’all that he got like 50 times less handsome by this point.

My conclusion: chivalry may not be completely dead, but it’s probably being bound, gagged and tortured in some dank, Camp Crystal Lake-like hamlet and may very well be DOA before we have a chance to resuscitate it.

What happened? I mean, not just what happened to leave me swaying and jerking with the swaying and jerking of the train, but what happened to men with the chivalrous spirit? When did Black mamas stop equipping their sons with manners? Maybe if I hadn’t grown up with cousins who took their hats off when they entered buildings and held doors open for as many ladies as there were to parade through them, I wouldn’t have come to expect respect and courtesy from Black men. And I’ve gotta be honest with you. I miss it.

I could blame hip-hop bravado as the reason behind the breakdown of male gentility. I mean, can I really expect a man to hold a door for me when his favorite rappers have told him that I’m only good enough to hold his… well, you get where I’m going here. But we play the blame game enough when it comes to hip-hop. There’s something to be said for the lessons these dudes did — or obviously did not — get at home that lets that bravado seep into his man mind and think it’s okay to steal seats from toddly chicks on the train.

I’m pro-girl power as they come but I am definitely not afraid to demand chivalry. I want my doors held open on a date and scooted to the inside of the sidewalk when we walk down the street. Being treated like a lady in no way compromises my power as a woman.

This much I do know: if the good Lord ever blesses me with a son, that little dude is going to be the doggone Billy Dee Williams of his generation because his mama is going to make ever so certain that he knows “gentleman” is more than a compound noun (of course, he’ll know that too, ’cause he’ll also be smart.)

It’s not even about molding him into a charming guy for little girls to swoon over. His dad can dap him up for the benefits of that. I just want this yet-unborn manners prodigy to understand that Black kings show appreciation for their queens.