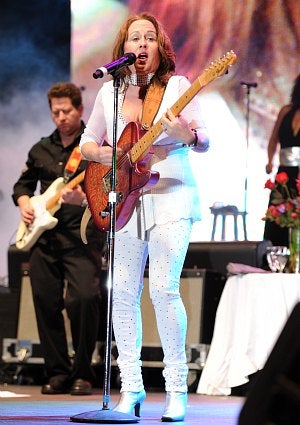 Teena Marie, who dazzled R&B audiences for years with her soulful voice and powerful, high-energy stage performances, died Sunday at her home in California. Mike Gardner, Marie’s manager, told me that Marie died after her 18-year-old daughter, Alia Rose Brockert was unable to wake her in her bed (Marie was born Mary Christine Brockert in Santa Monica, California). No cause of death for the 54-year-old four-time Grammy Award nominee has been released, pending an autopsy by the coroner’s office, Gardner said. Lynn Jeter, Marie’s publicist, said a month ago that the singer suffered a grand mal seizure. “Her and her little girl were watching a movie,” Jeter said. “(Alia Rose) was in the bed with her. Luckily someone was there. They called 9-1-1. The ambulance took her to the hospital. On the way, she had another seizure.” Jeter said Marie couldn’t get an appointment with a neurologist for nearly three weeks, and she was provided medication to handle the seizure. But Jeter said that the medicine prescribed “made her suicidal,” so Marie “reduced the meds herself.” Neither Jeter nor Marie’s family would reveal to me what specific medication Marie was administered for the seizures. Jeter said she and Marie talked at least once a week, and since the seizure, twice a week. Jeter said they had a “great” conversation yesterday, and Marie was excited about heading to Atlanta to perform this week, her first concert since suffering the seizure. “She evidently died in her sleep and her daughter found her,” Jeter said. News of Marie’s death initially spread across Facebook and Twitter. As different followers asked me about it, I brushed off the news because there were no official reports confirming the death. Comedian Kym Whitley tweeted that Marie was in fact alive, so when I called her, she put me on a three-way call with Jeter, who said she tried to reach out to Marie today as the rumors of her death heated up online, but she was unable to do so. So she told me to call Gardner. When I dialed his cell and asked about Marie, he simply said, “It’s true.” When I called Jeter back, she had gotten in touch with Marie’s home and described the scene there. And once Marie’s death was confirmed, I reach out to many of her friends, associates and admirers in the entertainment world, who talked about her tremendous impact. “A few months ago I saw her perform at a BET function in DC and I was sitting in the audience and was thinking to myself, ‘Where did the spirit of really finding joy in performing go?’ said singer/actor Tyrese. “So many artists today, they get on stage and perform, and it’s like its just work and I’m here to get a check. She was up there sweating; they kept bringing her towels and water, she was just really doing her thing. She was on stage with the high heels and singing her life away. I just loved it. It was a breath of fresh air to be around somebody who, after so many years, still had a passion to be on stage for the love of music.” Marie was known for a litany of hits such as “Square Biz,” “Lovergirl,” “Behind the Groove,” and “Out on A Limb.” Initially signed to Motown, Marie brought a soulful voice that shocked many when they discovered she was white. That love affair with black audiences was cemented with her duet with funk king Rick James on “Fire and Desire.” Cindy Herron, a member of En Vogue, said: “It’s a loss for those who loves her music, but also the music world. She still had so much to offer.” Last year, Teena Marie followed En Vogue at the Essence Music Festival in New Orleans, and Herron says she was “amazed because she’s such a showman.” For more of Roland Martin’s remembrance of Teena Marie, click on rolandsmartin.com.