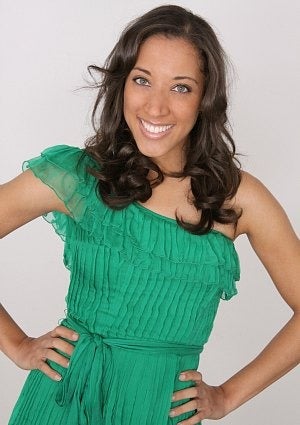 Comedian, writer and actress Robin Thede lives and breathes comedy. Whether writing jokes for comedian Mike Epps (when he hosted the 2010 BET Awards) or playing posh princess Priscilla on BET’s web series “Buppies,” the trained sketch comedian’s resume is no laughing matter. Thede most recently made waves when her “For Colored Girls” parody video, “For (Stuffed) Colored Girls,” reached over 111,000 views online. ESSENCE.com spoke with Thede to find out more about the spoof — and why she’d love to be the Black Tina Fey… ESSENCE.com: How did you come up with the skit “For (Stuffed) Colored Girls”? THEDE: I’ve been doing some stuff with Funny or Die for the last couple of months. I wanted to do something because the trailer kept cracking me up. I did “For Colored Girls Who Have Considered Suicide When the Rainbow is Enuf” in college, and was wondering how are they were going to make this into a movie. I didn’t want to make fun of any of the themes in the movie. Obviously rape and suicide aren’t funny, so I thought doing puppets would be funny. We gave Funny or Die the idea and they immediately said yes. We wrote the blog, shot it three days later and it was up on the site. ESSENCE.com: What has the response been like so far? THEDE: I haven’t seen anything negative. Everybody’s been really cool about it. I think we’re in a good place with comedy to be able to make fun of our own stuff. I really respect Tyler Perry’s work, I just wanted to do something funny with puppets. It’s really not any deeper than that. I write sketch comedy for a living so this is what I do. It’s important to laugh at ourselves without being mean, and that’s what I’ve been doing with most of the stuff that I do with Funny or Die. ESSENCE.com: You’re an actress, sketch and improvisational comedian and writer. How did you get your start in the industry? THEDE: A scout from Second City [Comedy Theater saw me, and I went on an audition. I was one of the youngest African-Americans ever to audition on one of their stages. There weren’t a lot of Black faces at all. I grew up watching “In Living Color,” so I didn’t understand why more of us aren’t doing this program. Once I got to LA I started writing sketch comedy for comedians like Mike Epps. I’m trying to put stuff out there in every lane. ESSENCE.com: Where do you see yourself in five years? THEDE: Ideally I’d love to be writing my own TV show. I’ve been doing quirky little comedy shows. I’d love to do work that I’m really proud of, and that people really get a kick of. It’s tough for a girl in comedy, especially when you don’t do stand-up. I kind of fly under the radar. I’m not super loud, over the top, in your face but I want to be quietly somewhere making big things happen. I really do love Tina Fey, all jokes aside. I would love to be called the Black Tina Fey; I think what she does is smart. I know so many Black female writers who have that goal, and I’d love them to have me to look up to for that.