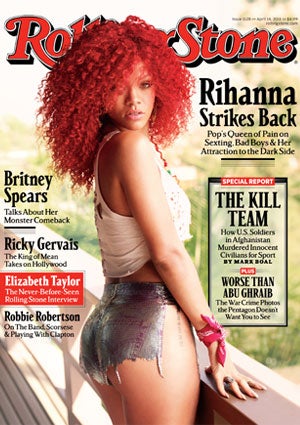 In the new Rolling Stone, Rihanna offers an extremely revealing look at her sex life (and at her amazing body… what’s in that Barbados water and how can I import some?). In addition to a few predictable questions about her former abuser, Chris Brown, and her upcoming role in the “Battleship” film adaptation, the 22-year-old singer gave a few details about her fetishes and desires that have started tongues to wagging and men to salivating.

Here she describes the autobiographical tone of her single “S&M”:

“Being submissive in the bedroom is really fun,” she says. “You get to be a little lady, to have somebody be macho and in charge of your s**t. That’s fun to me… I like to be spanked. Being tied up is fun. I like to keep it spontaneous. Sometimes whips and chains can be overly planned — you gotta stop, get the whip from the drawer downstairs. I’d rather have him use his hands.”

Oh. Well now. Good to know if I’m ever over Rihanna’s house and planning on trying to seduce her.

Don’t get me wrong. I’m hardly conservative when it comes to sexuality and I fully support Rihanna’s right to be grown and free with hers. However, I can’t help but wonder why we were given such personal details… and why via Rolling Stone? Isn’t this material more fitting for a women’s magazine, where ladies come together to share sex tips and dish on what we like to do in the bedroom? Here, it feels like it was deliberately offered to titillate readers and provide fantasy fodder. Or to keep her name on the blogs. Or all of the above.

Between the article, the body baring photos and the singer’s recent Vogue appearance (dressed in a sheer frock that is a bit more provocative than what we are used to seeing on cover models), it just seems like the “RIHANNA IS SEXY AND WILD” memo is being pushed a little bit too hard. I can’t help but feel like her camp’s attempts to avoid a victim characterization in the wake of the 2009 Grammy night incident have rendered her some sort of sexual object. And it again begs the question: why are Black women in the media so often required to be either hypersexual or asexual?

Sexuality has been a big part of the Rihanna formula for some time; before our eyes, the cute teenaged Island girl gave way to an exotic woman with an abundant erotic energy. Janet Jackson made a similar transition into sexygrownwomanhood, but it seemed so much more organic. She did a provocative (and now iconic) Rolling Stone of her own in 1993, but it wasn’t accompanied by explicit details of her bedroom antics. And Jackson was also 27 years old, with ten years in the game under her belt. When she later became a bit more revealing about such intimate matters, we already had the buy-in, already knew there was a lot more to Ms. Jackson than what she enjoyed between the sheets.

While many critics agree that Rihanna’s vocals and stage performance have improved tremendously since her debut, it’s unlikely that she’s going to be counted amongst the Pop legends, but she’s on top of the game right now. Is the sexy image enough to keep her there? In no way do I want to shame Rihanna for being so publicly sexual (or so public about her sexuality… I’m honestly unsure which it is at this point). I just wonder: if Rihanna is inclined to reveal so much, why not share a more holistic picture of who she is? How will audiences react if her next project isn’t as filled with racy songs or if her press isn’t all about provocative pics and sound bites? Is sexuality Rihanna’s performance art or a marketing ploy?