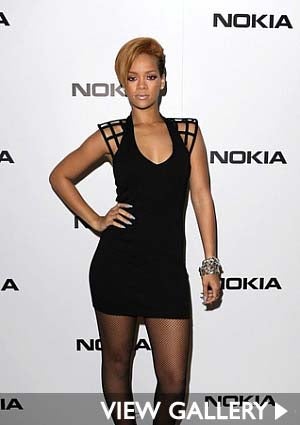 Rihanna rocked London’s Brixton Academy last night (Nov. 16) as she launched the international promotion of her forthcoming album, ‘Rated R.’  According to MTV News UK, the Barbadian songstress rocked “fishnet tights, lace blind-fold and a tight little black number” as she belted out new tracks like “Russian Roulette” as well as hits like “Please Don’t Stop The Music” and “Disturbia” against a backdrop filled with broken televisions and mannequins. “Ladies and gentlemen, for those of you who are easily frightened, we suggest you turn around right now,” said a pre-recorded message as the show began. “For those of you who can take it, we say: Welcome to the mad house.” Rihanna was also joined on stage by Young Jeezy and Jay-Z during the 40-minute set to perform “Hard,” “Run This Town” and “Umbrella,” respectively.