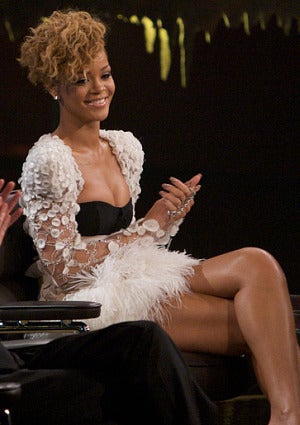 With her new album “Rated R” getting some serious air time, we just assumed Rihanna would be performing at the 52nd Grammy Awards this Sunday night. However, the Barbadian superstar told Carson Daly she’s not performing and insinuated that the incident with Chris Brown on the night before last year’s Grammy’s might be to blame, SingersRoom reported. “We messed their show up pretty bad last year. They might be a little mad at me,” she told Daly. According to SingersRoom, Rihanna will be in attendance at the event, as she is nominated for two awards with Jay Z and Kanye West for “Run This Town.” Read More
Loading the player...