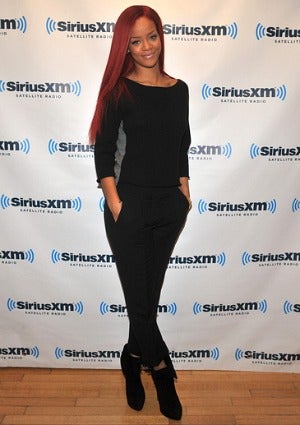 Rihanna has a come a very long way. The Bajan good girl — who started her career sending out help signals with the hit, “S.O.S” — went bad, but like her fire-engine red hair change, has slowly resurfaced to a more luminous place with the release of her fifth album, “Loud” — out today. The project is proof of Rihanna’s growth as an artist, and the 11-track album has accomplished being “loud,” but not necessarily cohesive. Like her previous album, “Rated R,” Ri-Ri is heavy on brazen lyrics and isn’t shy to touch on somewhat delicate material — this is definitely a PG-13 listen. In the album’s opener, “S&M,” Rihanna sings over a fist-pumping Stargate-produced beat: “I may be bad, but I’m perfectly good at it / Sex in the air, I don’t care ’cause I like the smell of it / Sticks and stones may break my bones / But chains and whips excite me.” While the beat makes you move, the lyrics are enough to make a grown woman blush. When RiRi isn’t trying to make our jaws drop with her “I’m-a-bad-kinky-girl” spiel, she mellows out on ballads like “Fading,” and the Britney Spears-esque “California King.” She shines on “Complicated,” ironically enough, because she kept it simple, and with a good listen you can tell Rihanna has worked on her vocals. Her label may have missed the mark comparing “Loud” to MJ’s “Thriller” album, but there are some stand-out tracks here. Like with her 2009 hit “Rude Boy,” Rihanna dazzles us with two songs on the album inspired by her Caribbean roots. The first, the more grassroots track, “Mandown,” and later on her tag team with Nicki Minaj on “Raining Men.” Sure to be a hit, both Rihanna and Minaj put their own unique twist on the reggae inspired riddim. Rihanna rounds out the album with collabo wins with Drake on “What’s My Name” and album closer “Love the Way You Lie (Part 2),” featuring rapper Eminem. Not sure if naming the title of the album “Loud,” was Rihanna letting us know the music on this album would make us stop and listen, but to her credit she has accomplished that. However it’s keeping our attention that “Loud” struggles to do. Without clear messages and strong themes the album is more “noisy” than “loud,” and the lack of cohesiveness makes it hard to follow. The good thing is Rihanna has consistently shown improvement from album to album, so we look forward to seeing what the future holds. “Loud” is in stores today. Will you be buying this album?