Rihanna’s latest surprise for her loyal Twitter and Instagram followers was a big one—the starlet announced that she is the cover star of the upcoming November 2012 issue of Vogue and shared a first look.

Rihanna is seen rocking her latest short cut and a sexy red, lace dress. This will mark her second appearance on the cover of the iconic fashion magazine. She first appeared wearing long red locks on the April 2011 cover. The pop star also covered British Vogue last November.

What do you think of her red-hot new cover? 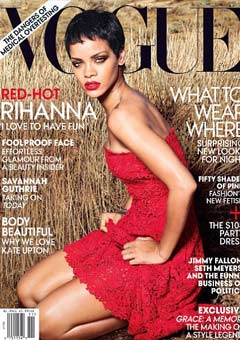