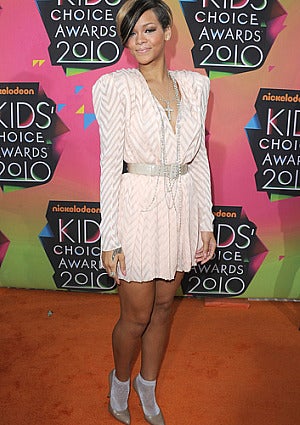 Rihanna‘s been popping up on a few major stages–like at the Kids’ Choice Awards–lately, and pretty soon America will be seeing a lot more of the Barbadian beauty on her just announced “Last Girl on Earth” tour. The “Rude Boy” singer is kicking off the run in Seattle on July 2, with pop singer Ke$ha and Young Money rapper Nicki Minaj as opening acts. The young trio will perform at 25 locations, including New York’s Madison Square Garden on August 12, finishing up in Chicago on August 15. Rihanna, who’s been going there with her fashion lately, said fans should “Last Girl on Earth” to top her previous tours, in an interview with AOL. “The production is unbelievable and the costumes, we just took it to a whole new level. Visually and sonically it’s going to be a big step up from the last time,” she said. Tickets go on sale on Friday at LiveNation.com. If you can’t wait, check out RiRi on American Idol this Wednesday night. Read More: