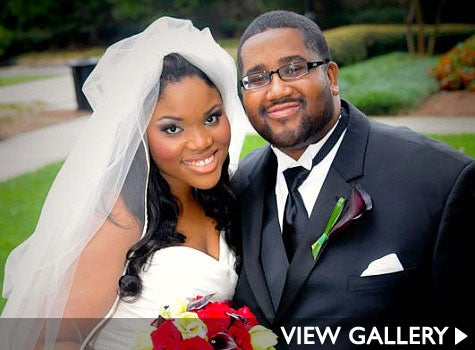 Bride: Rhonda Rawls, 26 Groom: Edmond Peterson, 28 Occupations: Rhonda — Assistant Director of Admissions; Edmond — Sales and Service Coach AT&T Hometown: Bride — Decatur, GA; Groom — Fayetteville, NC Wedding Location: The Historic Biltmore Hotel, Atlanta, GA Wedding Date: August 29, 2010 What’s Love Got to Do With It? The first thing Rhonda noticed about her Sociology classmate, Edmond, was his swagger. She had no idea that he had a beautiful mind and heart too, until the class was discussing the meaning of love, and Edmond gave his own interpretation. “I had noticed him before, but that time I really noticed him,” Rhonda giggled. “His answer was poetic, like an excerpt from a love story. At that moment I knew there was something special about him.” Edmond ended up chatting her up in the parking lot after class and the two very quickly became close friends and even went on a few dates, however, their courtship fell victim to the pressures of school and they drifted apart. Making My Way Back to You Four years later, after they had both graduated from Savanna State University, and Rhonda had moved to Atlanta, Edmund announced he would be joining her in the Gate City. “I had a turning point when I was still living in Savannah and she was living in Atlanta,” Edmond revealed. “I realized that I made a mistake by not committing to her earlier when I was in school. I said to myself, I was going to make sure if I ever had a chance to commit to her I would do it with all of my heart.” By the beginning of 2007 they were officially dating. “I was in the same place he was,” Rhonda said. “Neither of us forced anything. He was dead on when he said ‘Let’s take this to another level.'” No Plan B Edmond planned to pop the question just before dark at the Centennial Olympic Park in Atlanta. He thought he had a fail-proof plan, until he got to the parking lot. They drove around and around. When they finally got a space it was too late and a security officer informed them that the park was closed. “I’m driving and I’m trying to figure out what my plan B is,” Edmond retold his frustration. “He always has a plan B,” Rhonda noted. Plan B ended up being a spontaneous proposal in Rhonda’s apartment. “I was getting ready to go to sleep. I got in the bed and he grabbed me and took me over to the bar. Then he got down on one knee,” Rhonda remembered. “And I said, ‘Are you going to propose to me?’ Then he proposed, I burst out crying. It was emotional. It was beautiful. It was perfect.” Love is… He said: “Love is truly accepting who you’re with for who they are, loving them enough to work with them on the things they want to change but never changing the foundation of who that person really is.” She said: “Love is definitely dimensional. It’s how you feel about that person and how much you enjoy spending time with that person. When I’m around Edmond I’m completely comfortable. He accepts me for who I am.” Rhonda and Edmund got hitched in an elegant wedding at the historic Biltmore Hotel in Atlanta, Georgia. Share their love.