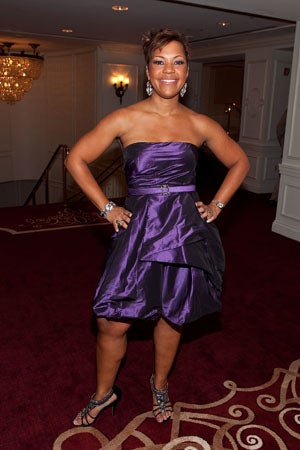 In the past few week’s episodes of “Real Housewives of D.C.” we’ve watched as tension between Stacie Turner and Australian expat, Catherine “Cat” Ommaney, rose to a fever pitch. Yet Turner and Ommaney seem to be working out their issues and are getting along just fine. “She just tells it like it is,” says Turner, who spoke with ESSENCE.com about understanding Cat and being fairly portrayed on reality TV. ESSENCE.com: So you and castmate Catherine “Cat” Ommaney had a bumpy start; have you worked out your kinks? TURNER: It’s interesting because we’ve gotten past her not liking my aunt Frances’ fried chicken and gotten to know her a little more, and you know, she just tells it like it is. I think she has a crystal ball because she starts predicting some of the things that are going to unfold that we don’t know at the time. In one episode, she predicted that the Salahi’s were not going to have grapes at their vineyard, and they didn’t. She predicted that they were fakes and something bad happens and we have this whole incident that’s going to unfold with Mary [Amos] tonight that’s just shocking. ESSENCE.com: Her ex-husband Charles Ommaney says he’s been treated differently as a White House photographer ever since joining the show. What do you think? TURNER: The reality is everybody took a risk doing this show. He was a very well-known photographer, and has been for many years. He is aware of reality shows and had the opportunity to watch them just as we did but he wanted to support Cat. On the one hand I sympathize if he had a bad experience. On the other hand he took a risk like everybody else and hopefully it will work out better for him. ESSENCE.com: So are you guys developing relationships outside of the show? TURNER: We have, because I didn’t know any of the ladies, except Mary, before the show. I find that they’re all very interesting women and we still invite each other to parties and have mutual respect for each other. ESSENCE.com: A lot of people on reality shows complain about the way they’re portrayed on reality shows. How do you feel about how you’re portrayed? TURNER: My reality on the show has really been my reality. The storyline with my family and me going to Paris searching for family were all things that were really a big part of our lives while we were shooting. Even in interactions with the other ladies you can see that our relationships are evolving. ESSENCE.com: So what should we expect on tonight’s episode? TURNER: Tonight is going to be interesting because it’s going to be a continuation of last week where you saw that Tareq was about to say something to Mary and you see her crying. It turns out that after having this wonderful time at the vineyard, out of the blue, Tareq blindsides Mary with an allegation about her daughter. I’m not going to tell you what it is but it is a serious investigation that involves the FBI. And there’s another storyline where we all start talking about politics and Cat shows up dressed as Sarah Palin. This week’s is really good because you start learning a little bit more about Cat and her personality, which allows you to understand her a little bit more. Tonight, Stacie Turner will co-host “Watch What Happens Live” with Andy Cohen and ‘Real Housewives of New Jersey’s” Teresa Giudice at 10pm.