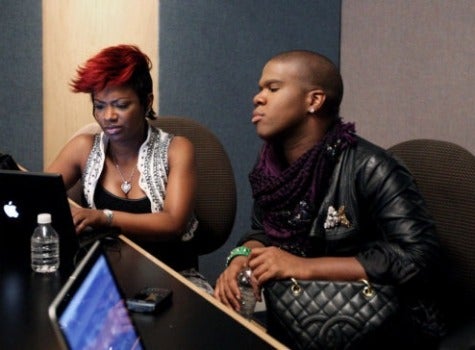 Lawrence Washington knows how to rock a skinny jean and stiletto better than most women. Last night the hair stylist to Atlanta housewife Sheree Whitfield showed us that he is more than just a beat face and fierce dresser. He’s a singer, too. Though Lawrence is still busy with the clients in his chair, he’s taking full advantage of the opportunity to revisit his first passion, singing. Introducing Lawrence Washington. Miss Lawrence, if you’re nasty. ESSENCE.com: Not only can you style hair but you sing pretty well too, as we found out on last night’s episode. How long have you been singing? LAWRENCE WASHINGTON: I started singing professionally when I was twelve years old. At fifteen, I did my first small tour over in Europe with a group called Youth for Christ. I’ve also done a lot of musical theatre. I sang with the Atlanta Symphony Orchestra and I’ve also done some Broadway. ESSENCE.com: Tell us about your song “Closet Freak,” which Kandi is working on with you? WASHINGTON: Kandi decided she wanted to work with an openly gay artist and I was the product of choice. She came up with this brilliant concept to do a song about people being in the closet or people wanting someone to be in the closet. Be it a woman messing around with a married man or a gay man messing around with a man on the DL. The song is saying that I’m not your closet freak. I’m not someone you can keep in the dark when the lights are up but when the lights go off, you want to love me and give me affection. That’s what the song is about and that’s what I’m all about. ESSENCE.com: Sheree speaks highly of you. What do you guys have in common, besides hair? WASHINGTON: Fashion. We both love fashion, and we love to have fun. Our confidence levels are also on the same page. We know who we are as people and we can go there if we have to. ESSENCE.com: Your wardrobe is just about as fabulous as the ladies on the “Real Housewives of Atlanta.” How long have you been rocking stilettos? WASHINGTON: I put on my first pair of pumps in 2003. I was going to a Prince concert so that was my ammunition. That was the first time I ever wore them and I’ve never fallen or tripped. It was real natural. ESSENCE.com: What other celebrity heads have you styled? WASHINGTON: [Former Miss USA] Kenya Moore is one of my personal clients. I’ve also worked with Ciara, Elise Neal, Serena Williams, Angela Bassett and Jennifer Holiday. ESSENCE.com: Are you now recognized on the streets of Atlanta? WASHINGTON: Oh yes, and I’m thankful because it’s driven a lot of business to my salon, Lawrence Washington Atlanta Salon. I’ve been blessed. And it’s funny ’cause a lot of people will see me and act like they want to talk about business and then eventually start talking about Sheree. It’ll turn into, “So does Sheree really act like that?” Honey, we’re not about to talk about Sheree. ESSENCE.com: What is one thing a Black woman should have in her closet and hair drawer? WASHINGTON: In her closet, a classic Chanel handbag.  In her hair drawer, a bottle of my glaze, the Lawrence Washington Glaze. ESSENCE.com: If you were sitting in a salon chair now, would you choose Afro-Kinky, Wet & Wavy or European straight hair? WASHINGTON: European straight. It’s easier to maintain.