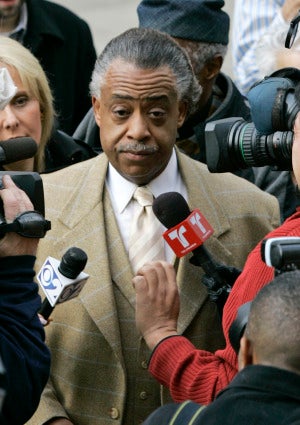 Rev. Al Sharpton’s former wife Kathy Jordan and their daughter Dominique Sharpton were arrested in Manhattan on Friday night, according to the Associated Press. Attorney Michael Hardy says Jordan and Sharpton were arrested when a dispute broke out after they were pulled over for running a red light.
The women were then taken to a local precinct and later released after receiving tickets for resisting arrest, disorderly conduct and obstruction of governmental administration. Police would not make further comment on the incident.
Rev. Sharpton has spoken out (Tweeted) via Twitterberry:
“Told to stay out of it. Dominique is grown and can certainly handle herself. Kathy showed the concern that any mother would show. I cannot imagin (sic)”
“How two unarmed women with no record, could be taken in cuffs from a traffic dispute with NO personal or property damage involved. No drugs”
“Or drinking at all. Well this is what we deal with everyday. We will never accept unfairness. On my way to the studio to be on the roundtabl (sic)”