By Lauren Porter · Updated October 27, 2020
When pictures surfaced of Malia and Sasha Obama attending their first State Dinner last Thursday evening, everyone had the same reaction: they looked beautiful. That’s everyone except a San Francisco ABC news anchor. Kristen Sze took to Twitter to share her disdain for the hefty price tag of Sasha’s gorgoeus gown. 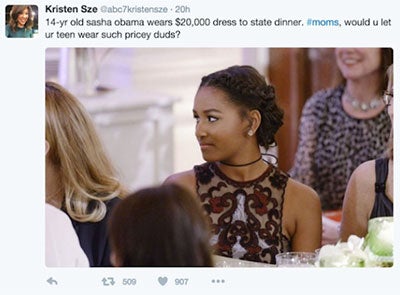 Soon after Sze’s tweet, both her mentions and the timeline were full of reactions on her completely unneccessary commentary. President Obama Toasts Daughters, Talks Importance of Family in Final State Dinner Speech

Better question: Is your mom The First Lady? No? Well, STFU, your opinion is irrelevant. https://t.co/5QwG68vAv6

Is Sasha Obama, a whole president’s daughter, supposed to wear a Children’s Place dress to the State Dinner because she’s 14?

The teens we’d want to represent America, Sasha & Malia, go to ONE fancy dinner, in 8 years, wearing a fancy dress, and it’s a problem.

The fucking nerve. As if the Obama’s took the Pentagon’s credit card to go buy Sasha a damn dress. https://t.co/UHvGLF26NE

Did people constantly make comments about how expensive first ladies’ clothes are before the Obamas?

Realizing the error of her ways, Sze deleted the tweet and apologized but the damage was already done.

Sasha & Malia looked amazing at State Dinner! Super happy they got 2 attend one in dad’s last year in office.

@abc7kristensze Oh please the Obama Girls looked beautiful & u tried 2 turn it into some ugly, I’m done with @abc7newsBayArea thanks 2 u.