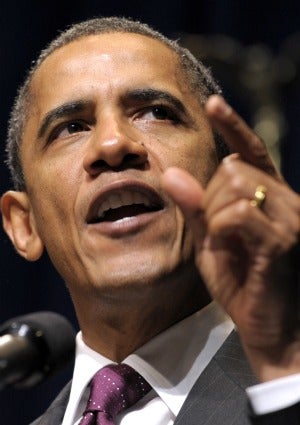 President Barack Obama regularly praises the importance of community colleges, and even held a White House summit on the subject earlier this month. Now federal officials are casting a spotlight on for-profit colleges — but not in a positive way. The U.S. Department of Education (DOE), rather, has proposed new regulations to limit federal aid to some for-profit career schools — institutions like the University of Phoenix and ITT Tech, whose sunny television commercials promise careers in nursing and electronics. Supporters of for-profit schools, including the National Black Chamber of Commerce and members of the Congressional Black Caucus, say that reduced funding will be devastating for the low-income and minority students who these schools disproportionately serve. DOE officials argue that, in reality, many of the for-profit programs leave students unprepared for gainful employment and unable to repay loans. According to federal data, for-profit schools are only 25 percent of the student loan market but represent 44 percent of all defaults. “Secretary Duncan thinks for-profit schools have an important role to play,” says Justin Hamilton, Press Secretary for the Education Department, stressing that some of their programs are perfectly sound. “But far too many are saddling students with debt they can’t afford, in exchange for degrees and certificates they can’t use.” By singling out ineffective programs, Hamilton reasoned, the new rules will only help students and have no effect on profit schools that do a good job. Leaders at for-profit institutions are convinced of precisely the opposite. “The objective is an appropriate one, but there are a lot of questions about the impact,” says Kevin Modany, CEO of ITT Educational Services. He claims the proposal could potentially prevent hundreds of thousands of students from accessing for-profit career schools. Students like 49-year-old Linwood Tucker of Petersburg, Virginia, who graduated from ITT Technical Institute in 2007 with a degree in electronics and engineering technology. Attracted to the school’s flexible hours, Tucker now works as an engineer. “Traditional colleges want to build the whole person,” he says. “But at a for-profit school you’re there just to learn and get the particular tools you need.” As for their low repayment rates, Modany argues that the problem stems from the demographics they largely serve. “Across all institutional types, we see a clear correlation between low repayment rate and the percentage of students who are minority–specifically Black and Hispanic–as well as students who are low-income, and students who are over the age of 25,” he says. “That’s whether you’re a for-profit college, not-for-profit, public or private. If the Department wants to make sure programs deliver value, I question why they would exclude all other institutions.” Well…there are other factors that DOE finds problematic. A hidden camera investigation conducted this summer by the Government Accountability Office, for example, exposed recruiters from 15 different for-profit colleges using high-pressure sales tactics, such as urging applicants to lie on federal forms to get more student aid. Hamilton insists that aggressive procedures, designed to let schools pocket federal money whether or not students graduate, are a longstanding problem. “There are stories out there of recruiting at homeless shelters and unemployment lines because it’s a volume business,” he says. Such practices are strictly prohibited by regulations under the Career College Association, which oversees for-profit colleges and trade schools. While Modany says deceitful actions by individual employees are indefensible, he doesn’t think wholesale punishment of for-profit schools is the answer. “I think the question has to be, ‘How do we better enforce the current laws that exist?'” he says. “The way to fix that problem is better enforcement, not new regulation.” DOE hopes to finalize new regulations, however, by November, and start cutting off schools that fail to meet them in 2012. With the looming changes, debate over for-profit schools is fiercer than ever. Dr. Chandra Taylor Smith, director of the Pell Institute for the Study of Opportunity in Education, which is currently reviewing the for-profit college industry, says the conversation is necessary to better address student needs. “I’m all for diversity in the ability to get an education,” she says. “But some abuses have happened that can’t be ignored. This debate is about not taking advantage of the disadvantaged.”