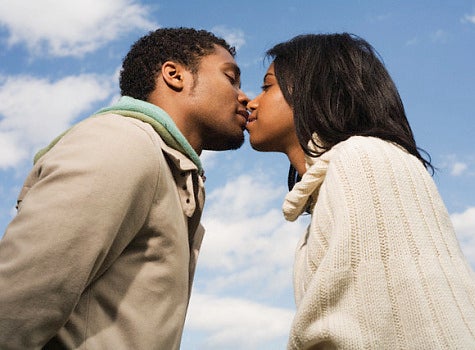 He’s perfect! Well, almost. What happens when you love your man, but can’t stand some of the things he does? If you want to make it work, here are ways to get him to stop talking with his mouth full, cursing like a sailor, wearing that awful t-shirt from his college days, and more.

He’s A Bad Kisser
First, make sure you’re not just used to a different kind of kiss. If you really liked your ex’s smooching style, you might not be opening your mouth to new possibilities. Next, identify what you do and don’t like about his kisses and subtly clue him in. Lean in to him or quietly moan when he does something you like and don’t be afraid to back away if he’s not doing it right.  Also, slow down. When things get heated too quickly, making out can turn into a slobber session. Taking it slow could be the key to locking lips.

He Has No Style
You may need to invest in him a little bit. When Valentines Day, Christmas or his birthday roll around, instead of opting for the always reliable bottle of cologne, buy your guy a pair of pants you know would look great on him and tell him how fine he looks when he tries them on. Remember to compliment him when he’s dressed well and don’t put him down if you don’t like what he’s got on. After all, you were feeling him enough to start dating him weren’t you?

His Breath Stinks
If it’s brand new: Keep breath mints or gum handy. When you’re hanging out, you can casually offer him a breath freshener to help with the halitosis.
If you’ve been dating for a while: Tell him. It may be hard for him to hear, but it’s probably best for the both of you if you just come out with it. It might just be that your guy needs to floss more often or you could be helping him with even bigger problems, like a gastrointestinal infection.

His Table Manners Gross You Out
Don’t call him out in front of company about his poor eating style. Wait until the two of you are having a quiet meal alone to show him there’s a better way to chew. Chances are your sloppy Joe just doesn’t know the proper table etiquette. He may be embarrassed, but he might be glad you made him aware of his eating errors.

He’s a Poor Pillow Talker
If he talks too much:
Keep in mind he might be talking a lot to make up for your silence. Chiming in a little bit more might render him speechless. If your loquacious lover is still talking, try to engage him in some heavy kissing. The nerve endings in your lips will up the sensual experience for you both.
If he doesn’t say enough:
He might be afraid of offending you or he could just feel cheesy. Encourage him. Ask him to tell you what he likes and test out your own bedroom vocabulary on your silent subject. It might prompt him to divulge a few naughty notions of his own.
If his dirty talk is too dirty:
Don’t be shy. Tell him how his trash talk makes you feel. And suggest alternative phrases for him to use between the sheets. If he’s a good guy he won’t want to freak you out, and he’ll probably tone it down. Also, keep an open mind. You might just need to loosen up little bit. After all, sex should be fun.

His Grooming Needs an Upgrade
Just like with his style, girl, you should have noticed his dirty fingernails and messed up hair when you met him. It’s important to know what you will and will not accept from a guy, so you’re not in the position of trying to change him. But if you’ve got a fixer upper, create a sexy scenario for his makeover. If it’s his nails that need work, give him a manicure and massage his hands. Also, compliments make a good impression on anyone. Tell him how much softer his skin feels with that new lotion you bought him or how much you love his new haircut.

He’s Got a Foul Mouth
It’s OK if he occasionally lets a curse word slip, but nobody likes a potty mouth. If his choice in four-letter-words makes you uncomfortable, you should let him know. Suggest that he might be able to express himself better by replacing offensive words that have lost their meaning with what he’s really trying to say.