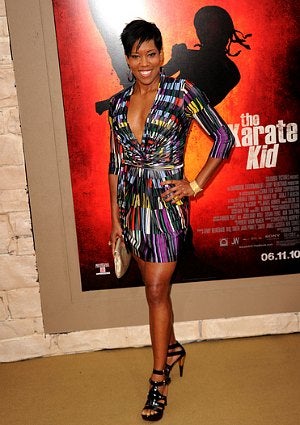 Were this year’s Emmys white-washed, again? Regina King thinks so. In a commentary for the Huffington Post, the former “227” actress vocalizes what many working actors of color in Hollywood were probably thinking as they watched the ceremony: Where are all the brown folk? “I try hard in my daily life not to engage in uncomfortable situations regarding race,” writes King. “But sometimes it’s very difficult to find other reasons that better explain why certain events play out the way they do. It is impossible for me to ignore the published statistics regarding the number of people of color mentioned, celebrated or honored in the history of the televised Emmys.” King notes that out of 1,000 nominations only 53 non-White actors were nominated in the top four acting categories. Having spent nearly all her professional life on television the “Southland” actress call the statistics “sobering.” She also wonders why “227” actress Alaina Reed Hall wasn’t included in this year’s memoriam and asks, “What is the process in determining who will and will not be recognized during the Emmy memoriam?” Indeed, a total of four actors of color were nominated in major categories this year. They include African-American actor Andre Braugher, Colombian actress Sofia Vergara, British-Punjabi actress Archie Punjabi and Lebanese actor Tony Shaloub.  What do you think? Does King have a point?