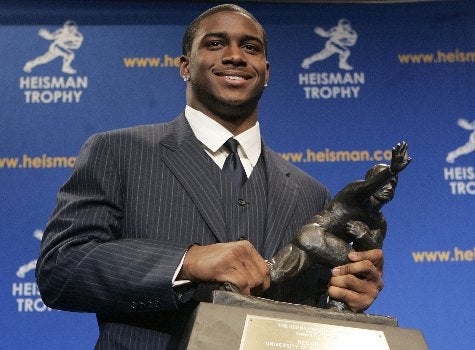 Reggie Bush is giving up the Heisman Trophy he won in 2005 while attending the University of Southern California, CNN reported. The return comes after a National Collegiate Athletic Association (NCAA) investigation that found that Bush and his family received luxury gifts from two would-be agents and that USC coaching staff knew about it. “I will forever appreciate the honor bestowed upon me as a winner of the Heisman,” Bush said in a statement released by the Saints. “While this decision is heartbreaking, I find solace in knowing that the award was made possible by the support and love of so many. Those are gifts that can never be taken away.” Back in June, the NCAA gave USC four years of probation and made it give up its last two wins of the 2004 season, including the 2005 Orange Bowl and all of its wins in 2005. Plus, the school can’t participate in bowl games in 2010 and 2011 and is banned from associating itself with Bush. “The persistent media speculation regarding allegations dating back to my years at USC has been both painful and distracting,” Bush’s statement read. “In no way should the storm around these allegations reflect in any way on the dignity of this award, nor on any other institutions or individuals. Nor should it distract from outstanding performances and hard-earned achievements either in the past, present or future.” Bush hopes to flip this “negative situation into a positive one by working with the [Heisman Trophy] Trustees to establish an educational program which will assist student athletes and their families [to] avoid some of the mistakes that I made.”