By Kirsten West Savali · Updated October 23, 2020
“We realize that the only people who care enough about us to work consistently for our liberation are us. Our politics evolve from a healthy love for ourselves, our sisters and our community which allows us to continue our struggle and work…If Black women were free, it would mean that everyone else would have to be free since our freedom would necessitate the destruction of all the systems of oppression.” — Combahee River Collective It is well-known, if not widely acknowledged in mainstream narratives, that the United States fetishizes and invests in structural violence against systemically disempowered Black people. Reform LA Jails is seeking to change that. Chaired by Patrisse Khan Cullors, veteran organizer, Black Lives Matter co-founder, and New York Times best–selling author of When They Call You a Terrorist, the Reform LA Jails committee fought alongside a  committed coalition of citizens, community leaders, businesses, and organizations steeped in this work in order to bring the Reform Jails and Community Reinvestment Initiative to fruition. If the LA county-wide initiative passes, the L.A. County Sheriff’s Department Civilian Oversight Commission will be granted subpoena and investigative power to effectively and independently investigate misconduct; the commission will also have the power to develop a plan that will reduce jail populations and redirect the cost savings into alternatives to incarceration. The initiative’s goal is to “reduce recidivism, prevent crime, and permanently reduce the population of people cycling in and out of jail that are experiencing mental health, drug dependency, or chronic homelessness issues,” according to the Reform LA Jails website. “For the past 15 years I’ve worked in coalition with groups across Los Angeles County to stop our county board of supervisors from investing in mass incarceration,” Cullors, who founded Dignity and Power Now, which would be the leading organization to birth Justice LA and then Reform LA jails, told ESSENCE. “So much of my life fell victim to the Los Angeles jail system,” Cullors continued. “I spent all of my youth and young adulthood visiting people inside of those jails, advocating for my loved ones to receive care instead of cages—from my father to my brother to several uncles and friends. The cycle of abuse and violence at the hands of sheriff deputies was an unspoken truth.” Today, the silence surrounding that abuse and violence is no longer loud. 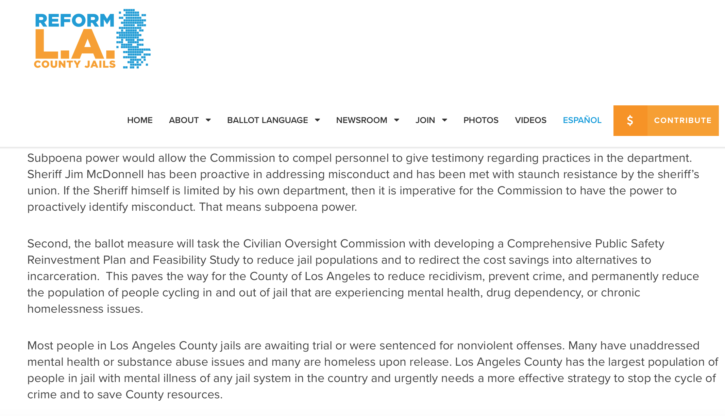 To place the Reform Jails and Community Reinvestment Initiative on the March 2020 ballot, Reform LA Jails needed 146,333 valid signatures of registered Los Angeles County voters—or 10 percent of voters who voted in the gubernational race. The coalition was given 180 days to gather the signatures, but it didn’t need it. In 131 days, over 246,000 signatures were collected and 9,248 new voters were registered, proving how critical this issue is to people tired of living in a carceral state. Currently, Los Angeles County is the largest jailer in the world with an average daily population of 17,000; along with New York’s Riker’s Island, and Chicago’s Cook County Jail—the largest single-site jail in the country—these three jail systems are also the three largest psychiatric facilities in the United States. According to a 2014 Vera Institute report, “On Life Support: Public Health in the Age of Mass Incarceration,” the prevalence of serious mental illness is two to four times higher in state prisons than in the general public. And two-thirds of inmates have a substance-abuse problem, compared with approximately 9 percent of the general public.
These dire statistics go hand in hand with the anxiety, depression, substance abuse and poverty too often experienced by fractured families coping with the absence of partners, children, mothers and fathers, who have been targeted through hyper-policing, mass incarceration and mass criminalization. Watch Reform LA Jails campaign video below: “People are frequently incarcerated not only because they have mental or emotional difficulties, but the experience of imprisonment itself … especially solitary confinement … produces mental illness,” Professor Angela Davis—scholar, freedom fighter, former political prisoner–said during a 2016 townhall focused on prison and jail abolition. Davis continued:

“It might be interesting to look at the history of mental asylums and the relatively recent effort to abolish psychiatric institutionalization—and this was an important victory. However, what did not occur with the closing of the huge mental facilities was the creation of a new set of institutions that would respond to the needs of people who have mental or emotional challenges, and we’re living with the consequences of that now. … When we talk about the possibility of closing down prisons, we cannot simply close down prisons, but we have to create the kind of institutions that will allow people to change and to heal and to develop.”

For Cullors, this is familiar terrain and it is personal. Her brother Monte, who is diagnosed with schizoaffective and bipolar disorders, was tortured while in the custody of the Los Angeles County Sheriff’s Department. “Every day I’m motivated by the people locked up inside of the county jails and those of us family members who became the main source of support and help for our loved ones,” Cullors tells ESSENCE. Though taking on the prison industrial complex in such a transformative way is not an easy feat, neither was pushing the Los Angeles County Board of Supervisors to create the first-ever civilian oversight commission. But Cullors is confident that the people united can never be defeated, and that abolition is possible—indeed, that abolition is necessary. “We believe Los Angeles County should invest 2.2 billion dollars into decentralized health care facilities across LA county’s 5 districts,” Cullors said. “We have 10 million people in Los Angeles many of whom have either been in the county jail or who have had a loved one in the jail. I know that we can provide adequate and wholistic resources for people who are poor, and Black and Brown.” The Reform Jails and Community Reinvestment Initiative will be on the ballot March 3, 2020. To learn more, visit ReformLAJails.com.