On August 9, 2014, Lezley McSpadden’s world was shattered when Michael Brown, her oldest son, was killed in Ferguson, Missouri. Through it all—questionable proceedings, an unfathomable outcome, rebellions and a stinging Department of Justice report on Ferguson’s police department and courts McSpadden has largely remained quiet. Until now. In Tell the Truth & Shame the Devil: The Life, Legacy, and Love of My Son Michael Brown (Regan Arts, $26.95), McSpadden (with coauthor Lyah Beth LeFlore) opens her soul, revealing a mother’s dreams for her family and the nightmare of losing a child to violence. Here, in an ESSENCE exclusive, McSpadden explains why it was time for her to speak now.

First off, I don’t tell lies, because I can’t keep up with them. My grandmother always said, “Don’t lie. Tell the truth and shame the devil.” She considered a lie a curse word and would be like, “Believe what you see and none of what you heard.” Your word is what you still got when you don’t have any money. That’s why if I give you my word, say I’m going to do something or tell you I got you, then I’m ten toes down. Anybody who knows me for real knows that. Feel me? So that’s why I have to say this to the world, and I want you to hear me loud and clear. Never mind what you’ve heard or think you know about Michael Brown, or about me, for that matter. You don’t know about Mike Mike. You don’t know about me. Now, you might know something, some snippet, some half a moment in time, but you don’t know my son’s life and what it meant, and an 18-second video doesn’t tell you anything about 18 years. 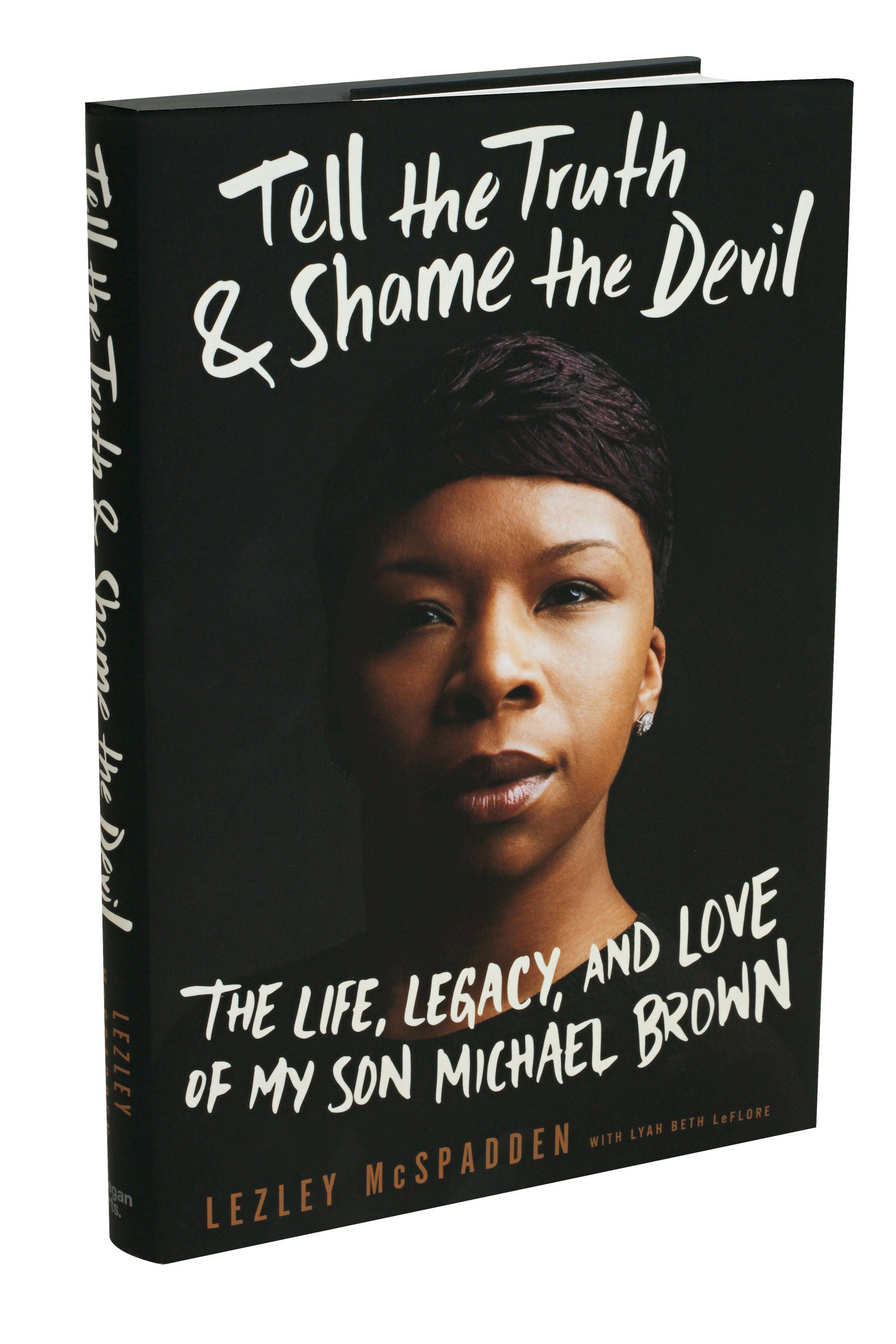 See, before the news media and the nation first heard the name Michael Brown, he was just Mike Mike to me. That’s what we called him. Everybody thinks he was a junior, but he wasn’t. Even though he had his daddy’s first and last name, his full name was Michael Orlandus Darrion Brown. I wanted my son to have his own identity, so he did. From the moment Mike Mike was born, I knew my life had changed forever. I was 16 years old with an infant. I didn’t know what kind of mother I was going to be. But when

I held him in my arms for the first time and felt his soft skin, he opened his eyes, and I could see my reflection in his little pupils. I suddenly wasn’t scared anymore. It was like we were communicating with each other without words.
I was saying, “I got your back, baby,” and he was saying, “I got yours, too, Mama.”

I can’t just say he was mine, though. When Mike Mike was born, he was adored, doted on and loved by me and his daddy, my siblings and his grandparents on both sides, who helped with his rearing. He was our beautiful, -unplanned surprise—my first son, a first grandson and the first nephew in my family.

And then one day our Mike Mike was shot and killed by a police officer on Canfield Drive in Ferguson, Missouri, and suddenly his name was being spoken everywhere: Mike Brown, Jr., Michael Brown or just Brown…but never Mike Mike, never our family’s name for him, the name that marked him as special to us and those who knew him for real. Pastor Creflo Dollar asked me what I thought about all the people out there on Canfield Drive when I got to the scene the day Mike Mike was shot. I turned, looking directly at him, and as sure as the breath I’m breathing, in a very matter-of-fact way, said, “I didn’t see those people. That day, I was looking for one person: my son. Nobody else mattered.” I think I kind of shocked -Pastor -Dollar. I was respectful, of course, but I had to tell it to him straight up. I was just keeping it real. You see, because as a mother, when your child is hurt, scared or in danger, you hurt, you want to comfort them, and you will protect them from harm, even if it means -laying your own life down. That day out on Canfield Drive, I had tunnel vision. Nothing and nobody was more -important than getting to Mike Mike and helping him in any way I could. It wasn’t until days later, when I looked at the news and people showed me pictures from their phones that I saw the crowd of folks who had been out there. So the only way I can really describe that day is to compare it to the day I had Mike Mike. Bringing him into the world was almost the same feeling as when he left here—a lot of people making noise and milling around, and my attention just glued to my new baby boy.

I’m not going to lie; I’ve been wanting to get mad and just go f–k the world up, because my son being killed has messed my whole life up. No way should my son have left here before me. But I have to stop myself every time my anger begins to build like that. If I look at it that way too long, I’ll find myself in trouble, doing something out of rage and revenge. That would be out of my character, and Mike Mike would never want me to do anything like that. It’s so hard sometimes, but I have to find some type of something to keep myself calm so I can be a good wife and mother for my other kids. That’s why, looking at my son’s death today, I try to see it from more of a spiritual standpoint. God let me have Mike Mike for 18 years. He wouldn’t let me have him longer because He had other plans for us. Those plans are still being revealed to me, but I believe a big part of His plans was to wake people up to some things in the world that need changing. I’m ready, though, for whatever He has in store.

What I do know for sure is that I was just a kid when I had Mike Mike. I made a lot of mistakes when I was young, but in raising him I got stronger, wiser. What we endured together, especially in his years as a small child, is a story that only his mother can tell. One that I have held close until now. The naysayers and judgers and haters wrote me off when I had my baby, saying things like, “She ain’t gonna do nothin’ with her life,” but I never gave up. I had to develop thick skin to get through those scary and confusing days, but I was determined to make it for my child, to do right by Mike Mike.

I never finished high school. It was once one of the most uncomfortable and embarrassing facts about my life. Of course, I wanted my high school diploma. I even thought about going to college, but at the time, it was about providing and surviving—and I didn’t know how to do that and -finish school. It was a hard choice, but life is hard sometimes, right? I was raised in a single-parent house and watched my mother work hard on jobs she should have been paid more for doing, making sure my brother, me and my sister had clothes on our backs and food on the table. I knew what her struggle had been. I’ve worked for years barely making -minimum wage, sometimes at two jobs, to put clothes on my children’s backs and shoes on their feet, even Mike Mike’s size 13 feet. I’ve even received public assistance, because a mother will put her pride to the side and accept help from others to make ends meet and care for her children.

As my firstborn, Mike Mike saw my struggles the most, and I know that motivated him to accomplish the dream I had of finishing school. Same for my other three kids, who came after Mike Mike. I know they can go farther and do better than me and be successful in this life. So on May 23, 2014, when Mike Mike received his high school diploma, just a few months before he was gunned down, I was able to live my dream through him. Every day is rough for me, but like Maya Angelou said, “Still I rise!” Amen!

I find a way to smile because my baby had aspirations and dreams. That really gives me comfort on the low days. That’s why I got to clear things up, because folks out here got it twisted: Mike wasn’t a criminal who deserved to be shot like a -dangerous animal. He was a good boy who cared about the right things, and family and friends were at the top of his list. He didn’t have a police record. He never got in trouble. He was a techie, in love with computers. He loved his mama and was proud to be headed to college and of the things he knew. The whole family was proud of him, too.

When my son was killed, everybody had his or her own version of how everything went down. Cops with their version of the facts. People living in the Canfield Apartments with another. The television and newspaper people, EMTs, firemen, old people, young people, Black, White, you name it—everyone with a different story that was supposed to be the truth about my son’s last minutes on earth. My son was dead on the street in front of the world, and everybody -except Mike Mike was busy telling his story. Even in the months since that horrible day, people still haven’t stopped talking, from Twitter to Facebook to Instagram, in the beauty shop and coffee shop, everywhere. Well, let me just say this: I wasn’t there when Mike Mike was shot. I didn’t see him fall or take his last breath, but as his mother, I do know one thing better than anyone, and that’s how to tell my son’s story, and the journey we shared together as mother and son.

Reprinted from Tell the Truth & Shame the Devil: The Life, Legacy, and Love of My Son Michael Brown by Lezley McSpadden with Lyah Beth LeFlore, out now.

This excerpt originally appeared in the June issue of ESSENCE, on stands May 13, 2016. Join Lezley live at the ESSENCE Festival Empowerment Experience on Saturday, July 2, 2016. Visit ESSENCEFestival.com for details.