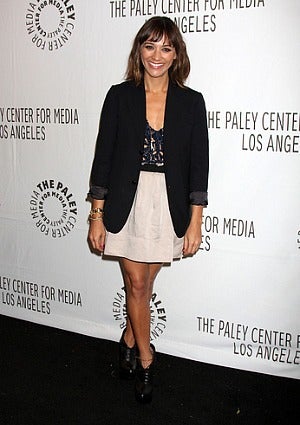 What would Hollywood be like without the co-star romance? Halle Berry may not have fallen for her french beau Olivier Martinez. Will and Jada may never have gotten married — imagine a world without Willow.

On the heels of the premiere of her indie film “Monogamy,” Rashida Jones opened up about the draw of the on-set love affair…

“You kind of fall in love with yourself in the eyes of this other person,” Jones told NYMag.com, adding, “It’s sweet because it reflects this want for romance and a relationship, but let’s look at the statistics: In general they’re not pretty great … And then the next time you’re in a cold place and you want to connect with somebody, you’re not near your husband or wife, and you’ll want to connect with somebody else.”

Jones says the romance is just another part of the biz. “It’s hard for actors to distinguish between those feelings, and it’s hard to tell your body to communicate these things physiologically and yet it’s just acting and nothing else. With emotional stuff like that, it’s like a weird, short, unaccounted-for affair.”

It's Really Over: La La Anthony Reportedly Files For Divorce...

Juneteenth is Officially a Federal Holiday

Black Students Pulled From Car by Atlanta Police During Geor...