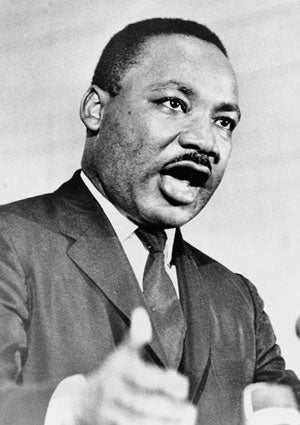 What a time we had making it through last week. First, there was the devastating earthquake that occurred, and continues to wreck havoc, in Haiti. The images of destruction and despair were difficult to see, yet we felt a sense of comfort in knowing that the world was–is--responding with resources and compassion. Last week also marked the passing of one of R&B’s most treasured performers, Teddy Pendergrass, who died at the age of 59.

Though our hearts remain heavy as we continue to pray for our brothers and sisters in Haiti as well as the Pendergrass family, time marches on and the world keeps turning. That’s how life is. The best we can do is to continue to be grateful for each hour of every, new day. Oh, and whether you choose clintonbushhaitifund.org, redcross.org or yele.org, please donate as much as you can toward the relief effort. We must keep the support rolling in.

Now, let’s all take a deep breath and turn the page to this week…
Monday, January 18:

In Memoriam:  Today is the day we honor the life of Dr. Martin Luther King, Jr., who would have celebrated his 81st birthday this year.  Here’s to a peaceful, reflective MLK Day

TV:  The ladies of “Let’s Talk About Pep” are back for round two of their love mission.  This time around, they’ve enlisted the help of ESSENCE magazine’s resident relationship guru, Demetria L. Lucas. Should be fun…and informative. Tune in to VH1 tonight at 10:30pm/9:30c.

TV:  Funnyman, Martin Lawrence, returns to comedy–this time as executive producer of the new sitcom, “Love That Girl,” starring Tatyana Ali, who turns 31 on Sunday.  Tonight’s episode is the first of four to air this week on TV One.  Word has it that the cable network will order more episodes based on viewership, so be sure to check your local listings and tune in!

Music Release:  Missy Elliott is back on her music game with her new album, “Block Party,” out today.

DVD Release:  Season two of “The Game” is out today as is the complete series set of “Girlfriends.”

Film:  Singer/actor Tyrese returns to his box office-grind in the action thriller, “Legion,” opening today, while The Rock keeps it kid-friendly with “Tooth Fairy.”