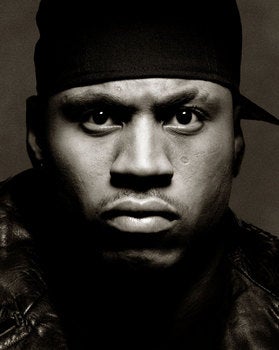 “I feel most colored when I am thrown up against a sharp white background.”

Music: Singer Melanie Fiona releases her debut album “The Bridge.” The Canadian songstress of Guyanese heritage has a soulful voice with a raw, rock & roll vibe. Fiona opened for the European leg of Kanye West’s “Glow in the Dark” tour. “The Bridge” is available in stores and online today.

Exhibit: Who Shot Rock & Roll is a photo exhibit of 175 photographs of some of the most intimate moments or brilliant performances of the world most famous musicians: Salt-N-Pepa, Tina Turner, Little Richard, LL Cool J (shown above) and many more. “Who Shot Rock & Roll” runs now through January 31, 2010 at The Brooklyn Museum.

Film: “Oh My God” is a documentary by Peter Rodger that asked the simple (and highly complex) question: “What is God?” Spiritualist, celebrities (like Seal and Hugh Jackman), Maasai tribesman in Kenya (above) and atheist all way in on this age-old question. “Oh My God” opens in theaters today.

Black History: Janet Collins was the first Black ballerina to dance at the Metropolitan Opera appearing in Verdi’s “Aida” in 1951.

*Appreciate life and enjoy the journey.