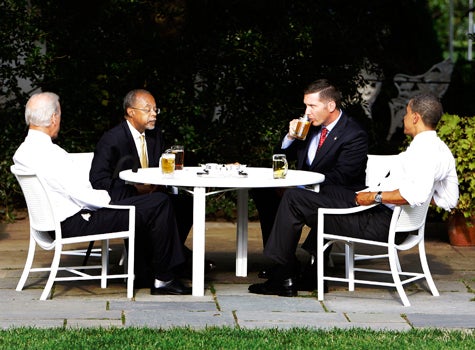 “If you’re wearing your pants down, and your tush is sticking out, I’m going to be against you,” an older Caucasian woman said to her husband as the crowd shuffled out of the 92nd Street Y’s Race, Class and Crime event featuring Harvard professor Charles Ogletree and award-winning journalist Soledad O’Brien last week in New York. In the conversation, which lasted a little over an hour, O’Brien interviewed Ogletree about his new book “The Presumption of Guilt” (Palgrave Macmillan) and the implications of last year’s infamous arrest of Henry Louis Gates, Jr. in his own home. Ogletree wrote the book after hearing from many African-Americans with similar dehumanizing instances of racial profiling.

Nearly a week after Gates was released, President Obama was asked at the end of a press conference on health care about the incident, to which he replied the police acted “stupidly.” “His comments divided the country along race lines. Obama became the Black president who sided with the Black professor against the working class White police officer,” Ogletree explained. The driving narrative of the evening’s discussion was that too often we assume people are guilty based on racial profiling without knowing the facts. Last year, there was only about six minutes between the phone call placed by Gates’ neighbor and his subsequent arrest. It was likely Sgt. Crowley, the arresting officer, had decided that Gates was guilty before even entering his home. O’Brien explained that African-Americans understood the debacle to be a clear case of racial profiling, but also felt as though Gates should have known better then to question a police officer. A recent report released by the Cambridge Review Committee pinned last year’s incident on “misunderstandings, failed communications” and a “certain degree of fear,” however, Ogletree believes the problem is deeper and that there is a connection between race and crime.

He suggested solutions like community policing and youth/police partnerships. He also stressed the cruciality for people of color to get involved in law enforcement and becoming officers. Ogletree expressed his disappointment with backwards laws like that of Arizona’s SB1070. “It puts police in an untenable position and it opens up the floodgates of racial profiling,” he said. Ogletree reasoned that we ultimately should not blame the police; the fault lies within the failing system.

Attorney General Eric Holder stated last year that America is a nation of cowards when it comes to honest conversations about race. In a time of perceived racial equality and cementing class lines, that genuine confrontation seems even more of a challenge. “It’s important that we talk about our story,” Vivian Campbell, an African-American attendee said. “We must speak to heal and be unapologetic about who we are. Nobody is as apologetic about who they are as us,” she explained.

But what if Obama were to advance race as a national conversation tomorrow, few would willfully jump into deconstructing modes of oppression and understanding their positioning in cycles of privilege. I wonder if the woman who probably believed herself a colorblind liberal for attending such an event would be inclined to address her own bias against anyone wearing their pants down with their tush sticking out.