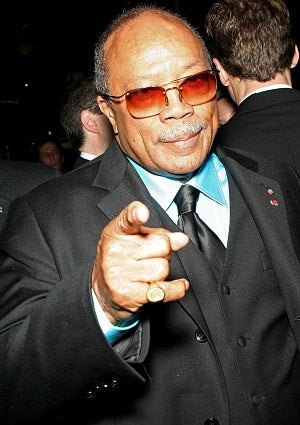 Earlier this week, Quincy Jones made some controversial remarks about Kanye West in an interview with Us Magazine. Jones, one of the greatest producers of the 20th century, didn’t take so kindly to being compared to West. “Did [Kanye] write for a symphony orchestra? Does he write for a jazz orchestra?” he said. “He’s just a rapper. There’s no comparison. I’m not putting him down or making a judgment or anything, but we come from two different sides of the planet…” Now Jones says his remarks were taken out of context. “I’d appreciate it if people didn’t take my comments about Kanye or anyone else for that matter out of context to contrive a story,” he said in a statement. “I have nothing but respect for my little brother Kanye and what he has achieved in his young career.” Jones added that he didn’t think the comparisons were “unreasonable,” but hinted that they might be a little premature. “This is not dissing Kanye, this is simply trying to express that I’m not a rapper!” Whether we love him or not, Kanye West is one of the most respected producers these days, but does his talent behind the board deserve comparison to Quincy Jones? What do you think?