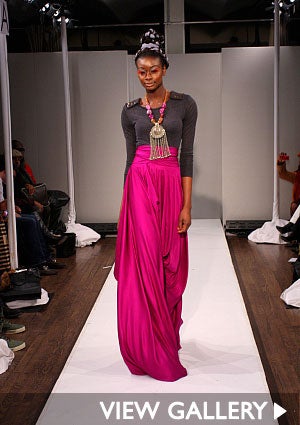 The return of Korto Momolu to New York Fashion Week was a hit. The “Project Runway” Season 5 finalist hadn’t shown a collection at NYFW since her life-changing appearance on the reality show, so you can just imagine how excited Momolu was to return to fashion’s biggest event of the year. And you can rest assured she brought out the big guns. The collection, which took place at the Union Square Ballroom, was an impressive collection of strong pieces that included dramatic coats, snuggly sweaters and a breathtaking magenta gown that caused excited whispering among the audience. We’re thrilled to see the designer evolving and growing as a designer. Needless to say we’re not the only ones taking notice, on the same day she debuted her new collection Momolu unveiled a jewelry and handbag line she is designing for Dillard’s. We got a chance to catch up with the designer to talk about her new collection, NYFW and what she’s currently working on. ESSENCE.com: What was your inspiration for your latest collection? KORTO MOMOLU: I was inspired by Northern Africa, places like Morocco and Tunisia. I was also inspired by the military, the traditional dress and interior design from those countries. I started designing the collection right after Thanksgiving. That is late for most designers, but I didn’t want to not show for another season. It was important for me not to wait. I loved all the coats because I felt they were statement coats. They were very high fashion, chic and tailored. I loved the sweaters as well. I felt the coats and sweaters were a different take on traditional items. I actually don’t follow trends, I follow my heart and I do what I feel is missing on store racks. So far, it’s been successful for me. ESSENCE.com: What did it mean for you to be back at NYFW? MOMOLU: Fashion Week in New York is the Mecca of fashion in America! Every designer needs to show there, among the greats who we admire and use as our motivation. It was amazing! There’s nothing like showing in New York. The energy and the press buzz was a great appetizer for weeks leading up to the show. ESSENCE.com: How do you believe you’ve grown as a designer since appearing on “Project Runway”? MOMOLU: I am a better draper and work better under pressure due to the way the show was structured. I feel I have a stronger sense of who I am as a designer. My aesthetic is very evident and I know my clientele and they appreciate that. I design for real women, curvy women, strong women, women who think outside of the box, women who start trends and those who want to collect classic foundation pieces for their wardrobes. ESSENCE.com: What has appearing on “Project Runway” done for your career and what’s the biggest lesson you’ve learned? MOMOLU: It opened up doors that would have otherwise been closed. I learned on the show that the judges don’t have the last word. God does. What’s meant for me, nobody can take away. They actually pushed me to work harder to show them that I do have the number one spot. Nothing is going to stop me from fulfilling my dreams. ESSENCE.com: Can you fill us in on what you’ve been doing since the show aired? MOMOLU: I’ve been designing a line of jewelry and handbags for Dillard’s department store that launched on February 15. I’m also working with madera woods to create an eco-friendly wooden jewelry collection. You can go to kortomomolu.com for the madera woods line and Dillards.com for the accessories. ESSENCE.com: Does living outside of New York make running your business difficult? MOMOLU: I compromise and put my family first. We pray as a family and know that hard work now and play later. I live in Little Rock and I have no problem with it. I have the best support here and I work directly with the Dillard’s corporate office, which is based here. Dillard’s is an Arkansas born company, so it works out for me. It was my destiny to be here. ESSENCE.com: As a Black designer, what has been your experience? MOMOLU: I think a lot of times we are not considered to be designers of high fashion. Most assume we can only do urban design. As a woman, I am the minority in a game where a majority of designers are male. I’m even more of a minority because I am Black. We can’t really name 10 female African American designers. I hope my story will encourage many young design students to keep on keeping on. It can happen, don’t give up. We have a voice and we need to be heard!   Read more:
Loading the player...