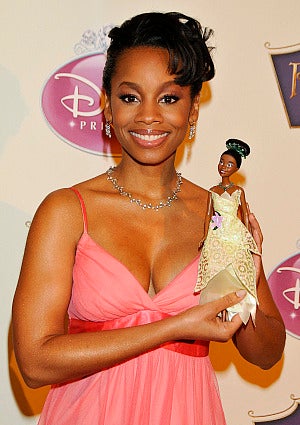 It’s official! Disney crowns their newest Princess: Princess Tiana. The coronation, which took place on Sunday at the historic New York Palace in Manhattan, also doubled as a celebration of the Blu-Ray and DVD releases of “The Princess and the Frog,” both in-store today. Since its national release last December, “The Princess and the Frog” has scored over $100 million at the box office. What’s even greater is that Princess Tiana, now among the illustrious line-up of Disney Princesses like Cinderella, Snow White, Mulan, and Pocahontas, is a Black girl. “It’s the beginning of something pretty amazing,” said a smiling Anika Noni Rose of the film’s DVD release. “It’s going to reach a much wider audience and I’m really excited for the kids to be able to have this at home. They can now be a part of the experience as often as they’d like.” Actress Audra McDonald, along with her daughter, Zoe, were at the event reveling in the news of the DVD release. “It’s been amazing, emotional and moving. It’s a great day for me to be able to share with my daughter,” said McDonald as she held Zoe’s hand. “The day that I saw the movie, there was a large group of African-American women with no children, in the back of the theater. It was just a bunch of women, between the ages of 45 and 60, watching the movie–it was simply moving.” Zoe chimed in, too. “I really liked the parts where Mama Odie was talking to Princess Tiana. I loved the movie,” she said, with a big grin. Rose seconded her emotion. “I loved Mama Odie’s advice when she says, ‘Dig a little deeper.’ I think it’s about looking at yourself and figuring out what’s inside that needs to be altered or expanded to make you a better ‘you.'” Read more: