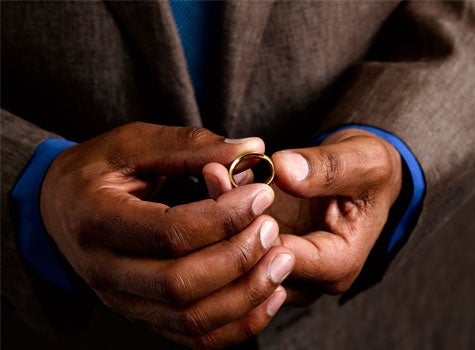 Ever spotted a married man without his wedding ring or met a man whom you thought was single but turned out to be married? The ring not only shows you’re taken, but it’s a physical symbol of your commitment to your partner.

With the Royal Wedding just weeks away, Prince William’s decision not to wear his wedding ring is raising some eyebrows.

We asked, ‘Is it OK for a man not to wear a wedding ring?’ Here’s what you said:


Nicholl: “If i was married i would prefer for my husband to wear his ring…but a ring really doesn’t matter because some still do what they going to do with or without one!”

Torrence: “As a man who lost his ring playing volleyball and almost lost it while dancing I don’t wear mines anywhere that I’m gonna be active”

Charlena: “It’s not the ring that keeps him committed. Many married men wear them and have inappropriate relationships outside the marriage; and some women look for men wearing a ring. What a mess huh?”

Regina: “While I think men should wear a wedding ring, it doesn’t seem to matter if they decide to cheat. As Tammy said to Evelyn on Basketball Wives “….there wasn’t a trick walking that didn’t know he was married” (sorry, I had to use that great line). It really boils down to a man’s integrity…if he’s going to cheat a ring (or not) doesn’t matter.”

Schlonda: “Don’t really see a point to anyone..getting married and not wearing the rings…It’s supposed to be a “symbol” of your union…Not surprised though..It’s seems no one takes marriage seriously these days anyway… SMH …”

Natasha: “The ring does not make the marriage – it’s the man that makes the marriage. Many men wear their ring and still act up (if you know what I mean). I prefer that my husband wears his ring but it’s not the end all be all. As for me, I always wear my ring – no matter what!”

Cyd: “No. Not OK! And for those Brits to call it ‘tradition’ only means to me, that somewhere along the line was a cheating Prince who refused to wear his ring, and it became custom. Now here young William decides he won’t break tradition. Please. Put them damn rings on and stop trying to parade around as if your single! :)”

Angreha: “Yes, my Husband doesn’t wear his all the time, and I don’t have a problem with it. If he isn’t confident enough in our marriage to resist temptation then we should have figured that out before we said our vows before God. The ring only symbolic of the marriage the true meaning is the love we share.”

Lorrie: “My husband is proud to wear his wedding ring and feels bare without it. Yes, the ring is a symbol, but it can take on a deeper meaning if he insists that the wife wear her band, while he ‘doesn’t have to wear his,’ or vice versa.”

Betty: “No, it’s not okay. If Prince William breaks tradition by not having no maids and all then he can break tradition by wearing a wedding ring. When you make a vow, you make a promise, and when you do them it’s suppose to be kept! It’s time to make a stand!”