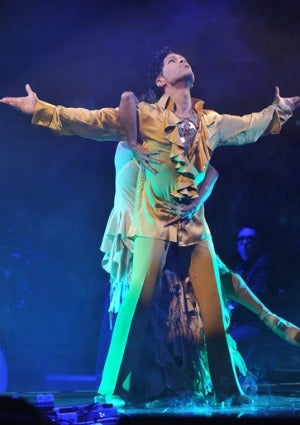 You’ve heard about the sold-out tour dates. Maybe you even saw a twitpic of his ever-changing set list. You have probably read about the impossible list of featured artists and surprise guests. But until you see him rise from the Madison Square Garden Stage in a purple mist, you couldn’t possibly understand.

Alone on a massive yet minimalist stage in Madison Square Garden, stood Prince, along with a grand piano and the beautiful one, Misty Copeland. The classical ballerina played the perfect game of cat and mouse with the legend while en pointe. Her pirouettes pleased while his melodic cries lulled the audience into the euphoric state that would coin the night. “Do you want him? Or do you want me? Because I want you.” Dressed in a purple ruffled satin shirt, sequence vest, blinged-out neck piece and an equally blinging ring, Prince begged in every key from A to G. It was enough to turn even the coolest of VIP concertgoers into screaming fanatics.

Then there were the background vocalists led by the unforgettable Shelby J. — when the three soul-singing sisters hit the stage in all manner of fabulous and funkadelic costumes, the crowd went nuts for the second selection “Let’s Get Crazy.” Minutes went by like seconds as Prince and the girls performed “Delirious” and “1999.” After a guitar change he performed “Little Red Corvette” and “Raspberry Beret” each with a new, nearly unheard of original arrangement.

Prince got into his old naughty self as he performed “Cream” and “If I Was Your Girlfriend” featuring the fabulous Janelle Monae, who honored the legend at the 2010 BET Awards. Though the onstage collaboration was a nice idea, the 52-year-old legend ran circles around Janelle sonically and in performance. Still, the set was the perfect mix of old and some new. “Gingerbread Man” is the song that had even the most die-hard fans scratching their heads. Was it an old song or a new song? Regardless, it was an amazing song. The crowd sang along in a trance-like state as if it were a classic. And somewhere in the middle of all that, in true naughty Prince fashion, he opened his shirt and the crowd went wild.

After an encore, Prince returned with “Kiss” and the most amazing piano medley of “Condition of the Heart,” “Do Me, Baby,” “I Wanna Be Your Lover,” “How Come U Don’t Call Me Anymore” and “Sometimes It Snows in April.” Another encore followed and Prince invited special guests Cyndi Lauper, Egypt Sherrod, Janelle Monae and select audience members onstage to close the show with a cover of The Time’s “Jungle Love.”

But the night was far from over.  Everyone knows that after the show is the after party, except in Prince’s case. After the party is the 31/2 hour jam session at a secret location. Popular lounge and restaurant Butter was the venue set to house the history-in-the-making jam session. In front of a crowd of 40 or so they jammed. Prince, Cyndi Lauper and Janelle Monae got down singing “Controversy,” Chic’s “Le Freak” and the Ohio Players’, “I Want to Be Free.”

And even partygoers got on the mic and added their two cents to the background vocals, while Prince played never before heard arrangements to the classics of funk and disco. It was three days before 2011 and the crowd partied like it was 1999, 1989, and 1979 in one unforgettable night. It’s undeniably one of those nights you’ll remember for the rest of your life.

Have you been to any of Prince’s “Welcome 2 America” tour concerts?