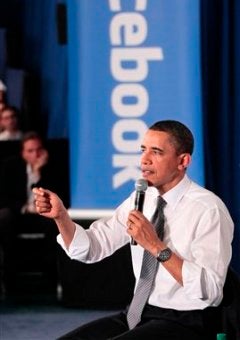 Yesterday, President Obama paid a visit to Facebook headquarters to host a town hall meeting with Facebook C.E.O Mark Zuckerberg. The hour-long conversation was a chance for the President to connect with and widen his appeal among youthful supporters.

Employees of Facebook joined President Obama for the meeting in which he discussed the economy, education in math and science, immigration reform and the real-estate market. The President also gave praise to Facebook, saying, “Historically, part of what makes for a healthy democracy… is when you have citizens who are informed, who are engaged. And what Facebook allows us to do is make sure this isn’t just a one-way conversation.”

In an effort to engage social media users, President Obama also answered questions that were submitted online via Facebook, and the town hall was broadcast via a live online feed.