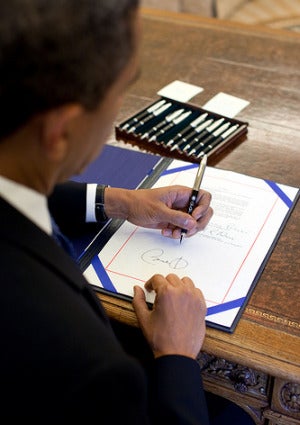 President Obama signed the Ryan White HIV/AIDS Treatment Extension Act today after it was approved by the Senate last week, according to TheAdvocate.com.

The bill will provide $2.5 billion annually until 2013 for funding of critical HIV/AIDS treatment and some prevention programs. The program is expecting to help about 500,000 mostly low-income and uninsured people living with AIDS/HIV every year.

The Ryan White CARE Act is named after a teenage boy who contracted AIDS through a blood transfusion. It was originally passed in 1990 and has since been extended three times.

Upon signing the Act, President Obama stated that we’ve got to stop looking at AIDS as if it’s going on somewhere else because the disease is often overlooked as a serious epidemic in the U.S.

“We are continuing the work of crafting a coordinated, measurable national HIV/AIDS strategy to stem and suppress this epidemic,” said President Obama. “I’m pleased to report that the Office of National AIDS Policy, led by Jeffrey Crowley, has already held eight in a series of 14 community discussions in cities across the country.  They’ve brought together faith-based organizations and businesses, schools and research institutions, people living with HIV and concerned citizens, gathering ideas on how to target a national response that effectively reduces HIV infections, improves access to treatment, and eliminates health disparities.”–WLW