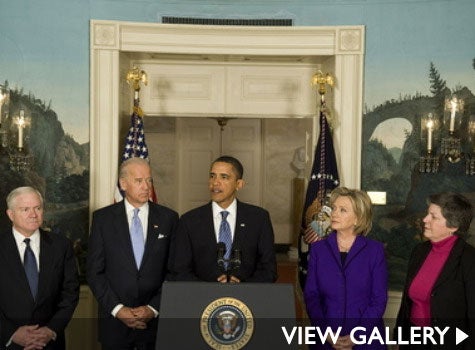 In the two days since a catastrophic earthquake struck Haiti–the worst to hit the Caribbean in 200 years–President Obama has been working with top members of his team to formulate our government’s response. This morning from the White House, joined by Vice President Joe Biden and Secretary of State Hillary Clinton, the President detailed what he called one of the largest relief efforts in our recent history.

Informing reporters that he has directed his administration to launch a swift and aggressive efforts to save lives in Haiti, where thousands are already believed to be dead, he said it will require every element of our national security team. “I’ve made it clear to each of these leaders that Haiti must be a top priority to their departments and agencies right now,” he said.

The first wave of American relief workers are on the ground, including search and rescue teams, military officials to receive equipment and resources 24 hours a day, and airlifts to send resources like water and medicine. Armed service members from the Coast Guard, Army, Marines and Navy have been deployed with aircraft carriers and a hospital ship. Injured American citizens in Haiti have been airlifted out, and additional evacuations are being run.

For the many Haitian Americans who are desperately seeking information on their family members on the island nation, the State Department has set up a phone number and email address at www.state.gov dedicated to inquiries about missing loved ones.

“Today, I’m also announcing an immediate investment of $100 million to support our relief efforts,” said President Obama. “This will mean more of the life-saving equipment, food, water and medicine that will be needed. This investment will grow over the coming year as we embark on the long-term recovery from this unimaginable tragedy.” The President also encouraged Americans to contribute to organizations in the relief effort.

Finally, he addressed the people of Haiti directly.

“To the people of Haiti, we say clearly, and with conviction, you will not be forsaken; you will not be forgotten.  In this, your hour of greatest need, America stands with you,” he said. “You have endured a history of slavery and struggle, of natural disaster and recovery. And through it all, your spirit has been unbroken and your faith has been unwavering. So today, you must know that help is arriving–much, much more help is on the way.”

Read more from our Washington Correspondent