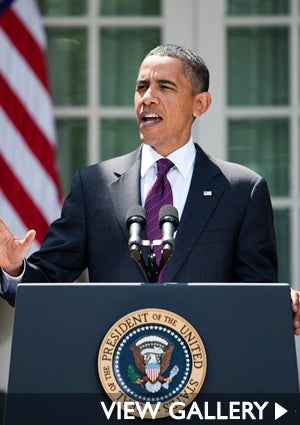 This week, 115 young leaders from 45 sub-Saharan African countries — activists, entrepreneurs, writers, clergy members and nonprofit leaders — gathered in the White House East Room for a town hall with President Obama for a discussion about the continent’s future. The guests, all between the ages of 20 and 35, many dressed in colorful traditional clothing, greeted the President with thunderous applause as he entered, but once the clapping faded, they also challenged him with questions about hardship in their nations and how his policies will ultimately impact them “I don’t see Africa as a world apart; I see Africa as a fundamental part of our interconnected world,” Obama told the young participants, invited as part of a three-day State Department conference. The President went on to say that their generation’s talents and imagination will steer the future direction of their societies. “And the United States wants to be your partner.” A True Partnership? One Ghanaian woman was wary that a country as powerful as the United States would deal fairly with poor nations. “Is America committed to ensuring a partnership that might not necessarily be beneficial to America, but truly beneficial to the sovereign interest of the countries that we represent?” she asked. “All countries look out for their interests,” Obama responded, unfazed by the confrontational question. “I’m the President of the United States, so my job is to look out for the people of the United States,” adding that the United States and Africa share some common interests, such as business in the continent’s growing economy and reducing the spread of AIDS. There will be conflicts and different worldviews, he said, but overall, success in Africa also enhances the United States.   The President further argued that when it comes to aid, both sides must be accountable — the United States must listen and make sure that plans are developed indigenously, and countries receiving aid dollars must use them effectively. “Partnership is a two-way street,” he said. Hardline on HIV/AIDS Representing Malawi, a young man illustrated the devastating impact of HIV/AIDS on development in Africa, and pointed out that some global AIDS workers have criticized Obama for not contributing enough funding toward AIDS treatment in Africa.   President Obama first defended his record on global AIDS. As the United States struggles from its economic recession, he said, he’s actually increased funding to the President’s Emergency Plan for AIDS Relief (PEPFAR) — just not as much as critics would like. “I’m sympathetic to [that], given the fact that the need is so great,” he said. “But understand I’ve increased it.” He explained that his administration has also shifted its strategy, focusing not only on treating those infected, but also prevention and building broader public health systems. “We’re still going to be funding, at very high levels, antiviral drugs,” he said. “But it will be an endless effort if the transmission rates stay high and we’re just trying to treat people after they’re sick.” Struggle for Democracy On the subject of good governance and democracy, a woman from Mozambique asked Obama his advice for young Africans who want these principles solidified in their countries. “Because, of course, our reality is very often starkly different,” she said, describing elections that often lack transparency and lead to social conflict. Obama first discouraged reacting with violence, arguing that such conflict scares off investors and makes it more difficult for business people to create opportunities. He advised African youth to promote the values of openness and civil disagreements in their own organizations. “I’m going to speak to the men here, in particular — if you are part of an organization where you profess democracy but women don’t have an equal voice in your organization, then you’re a hypocrite,” he said, to applause from both women and men in the audience. Within their own networks, he said, everybody should be heard because that in and of itself forms good habits.   ‘He’s a Great Leader‘ “I was really struck by the way Mr. Obama is quite informed about what is going on in Africa,” said Museme Munira, 29, of Sudan, in an interview after the forum, which also touched on political conflicts in Zimbabwe and Somalia. “The way I look at it, the U.S. is prepared to engage with Africa and create a very positive partnership. The President is concerned for the development of Africa as much as looking internally into his own policies — getting to a point where the U.S. and Africa can contribute equally in a partnership of non-exploitation, respect and responsibility.” Koffi Nomedji, 23, from Togo, said of the town hall and President Obama, “I think he’s a great leader, and I think it’s great for Africa to have an African child as the most powerful man in the world. There’s plenty of work to be done, but this forum showed that we will improve our societies and change mentalities as the youth takes over.” For more of Cynthia Gordy‘s Obama Watch stories, click here.