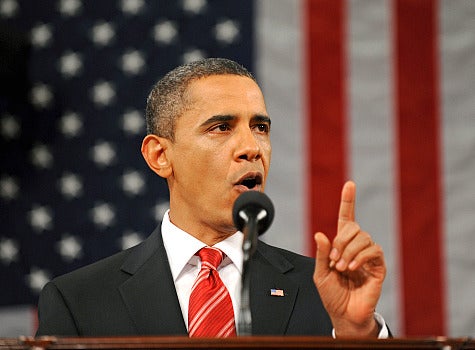 President Obama came into his State of the Union address tonight facing a mountain of domestic challenges–millions of Americans out of work, banks refusing to let distressed homeowners refinance their loans, and healthcare legislation on life support, to name a few. To change the dismal narrative around the White House, the President gave a feisty, almost campaign-style speech that stressed tackling the concerns of everyday Americans, including moves to spur job creation, tougher regulations on the financial industry, and a three-year freeze on most federal spending. “They are tired of the partisanship and the shouting and the pettiness,” he said of American frustration over the government’s failure to solve so many problems. “They know we can’t afford it. Not now.” While sticking to his insistence on bipartisanship, he took a more aggressive tone toward members of Congress, almost using parts of his speech to shame them. “To Democrats, I would remind you that we still have the largest majority in decades, and the people expect us to solve the problems, not run for the hills,” he said sternly. “And if the Republican leadership is going to insist that 60 votes in the Senate are required to do any business at all in this town, then the responsibility to govern is now yours as well. Just saying no to everything may be good short-term politics, but it’s not leadership.” The President also defended the accomplishments of his Recovery Act, including the extension of unemployment benefits and 25 different tax cuts. “Let me repeat: we cut taxes,” he said to rousing applause from the Democratic side of the aisle, focusing on an aspect of the stimulus act that got buried in the messaging from the White House last year. He repeated the White House figure that the Act created or saved two million jobs. But he quickly followed that by addressing the country’s most urgent need–more jobs, which he called his “number one focus for 2010.” Among his proposals were using the $30 billion of bailout money, that banks have paid back, for helping community banks give credit to small businesses, more business tax cuts, and making serious investments in clean energy as other countries have done. “As hard as it may be, as uncomfortable and contentious as the debates may become, it’s time to get serious about fixing the problems that are hampering our growth,” he said, after demanding a jobs bill on his desk “without delay.” Throughout the speech, reaction from the House floor was typically split–Democrats jumping to their feet to applaud certain proposals, while Republicans sat stoically. (The President did not, however, have to contend with Joe Wilson-style heckling this time.) But oftentimes the Republicans also stood and clapped, even to measures on jobs, clean energy, and healthcare reform that they’ve already voted against. It will be interesting to see what they do later down the road, as bills are debated. Although healthcare reform has been the President’s top domestic priority, he didn’t address it until halfway through his speech. He admitted that he had not explained it clearly enough to the public, adding to some of the stalling in Congress. “But I also know this problem is not going away,” he said, describing the millions who are uninsured and patients being denied for pre-existing conditions. “I will not walk away from these Americans, and neither should the people in this chamber.” He stopped short, however, of advocating for a specific way to proceed on the bill…and that might not be enough to get Congress to stick their necks out and get it done. President Obama touched on a wide span of other issues in the nearly 90-minute speech, including national security, the wars in Iraq and Afghanistan, repealing the “Don’t Ask, Don’t Tell” policy regarding gays in the military, and responding to desperate conditions in earthquake-ravaged Haiti. But whatever the subject, the President maintained a dynamic tone–sounds less like a college professor, as he can get sometimes, and more like a populist leader with a firm control of his message.   “We have finished a difficult year,” he said in closing. “But a new year has come. A new decade stretches before us. We don’t quit. I don’t quit.” What did you think of President Obama’s State of the Union address?
Loading the player...