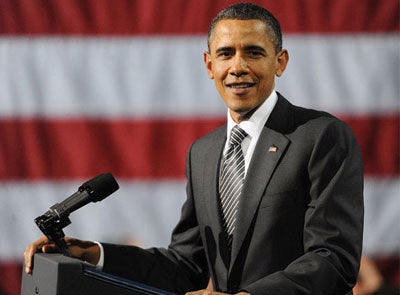 ]This week, President Obama signaled his returning dedication to the electoral base that played a large part in his 2008 triumph — young people and minorities. On Tuesday, the President spoke at a community college in Northern Virginia to a crowd of mostly students that were a mix of all races and ethnicities.

Rather than choosing a school with a largely homogeneous population, the President’s decision to speak at Northern Virginia Community College, the second largest community college in the country, says a lot. It indicates that he is serious about continuing to extend his hand to young people and those with multicultural roots. As he approaches the 2012 presidential election, the President will have to hold onto the demographics that voted for him in the last election and continue to support him even while his overall approval rating declines. In 2008, nearly 70 percent of voters 29 and younger voted for Obama — the highest ever for any one candidate. And an April 2011 Harvard University poll said 55% of adults aged 19-28 said they approved of Obama. They may not agree with some of his policies or the way he’s handling the economy, but they seem to trust him and relate to him.

Obama’s critics in the Black community, most prominently, Dr. Michael Eric Dyson and Dr. Cornel West, declare that he has done little to improve the lives of the very people who got him into office. Last week, the White House launched a new web site directed toward African-Americans that aims to better illustrate how the Obama Administration’s policies have benefited their community. The web site focuses on elements like job creation for small businesses and the benefits of health care reform. The White House also created a web site dedicated to the Hispanic community.

On Wednesday, Obama continued his youth-outreach approach by holding a Facebook Town Hall meeting in Palo Alto, California. Another Harvard study found that Facebook is the best way for politicians to reach out to 19- to 29-year-olds. “More and more people, especially young people, are getting their information through different media. And obviously what all of you have built together is helping to revolutionize how people get information, how they process information, how they’re connecting with each other,” Obama said.

He seems to be getting a head start on the 2012 campaign by acknowledging the reality that anyone who wants to be a serious contender for the presidency will need to capture a large portion of the youth vote. Obama finished his Facebook gathering by urging supporters to crusade for him like they did three years ago.

“I know that some of you who might have been involved in the campaign or been energized back in 2008, you’re frustrated that, gosh, it didn’t get done fast enough,” He said. “If we come together, we can solve all these problems. But I can’t do it by myself. The only way it happens is if all of you still get involved, still get engaged.”

Do you think President Obama will capture the youth and minority votes in 2012 like he did in 2008?