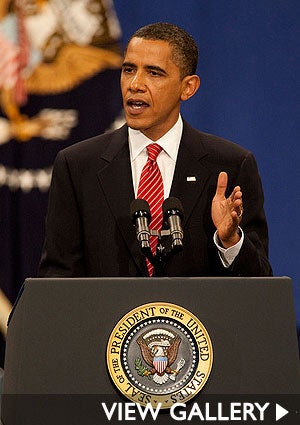 At the closing session of the White House Jobs Summit last week, President Obama said that some of the ideas from it could be “translated immediately into administration plans and potentially legislation.” Today, in a major speech on job creation and economic growth, he clarified a plan that he says will put Americans back to work in the short run, and also set a foundation for boosting the economy in the long run.

The main components of the president’s proposal were expansions of steps he’s already taken through the Recovery Act:

Increased tax cuts and tax incentives for small businesses, to encourage them to hire and keep employees

What’s different this time is his proposal to vastly increase their funding with money from the Troubled Asset Relief Program (TARP), originally set aside for bailing out banks and other financial institutions. But banks have been repaying their loans faster than expected, leaving the government with more than $200 billion in untapped resources.

There has rarely been a less loved or more necessary emergency program than TARP, which–as galling as the assistance to banks may have been–indisputably helped prevent a collapse of the entire financial system,” said the President, declaring that it’s time to bring the program to a close because it has served its initial purpose. “This gives us a chance to pay down the deficit faster than we thought possible, and to shift funds that would have gone to help the banks on Wall Street to help create jobs on Main Street.”

The President’s suggestion to shift unused TARP funds to help “Main Street” has been heatedly contested in Capitol Hill, with Republican lawmakers insisting that the money be used toward bringing down the federal deficit instead of new programs for job creation.


Another roadblock for the President’s idea: Isn’t this suggesting more of the same? On that end, the President admitted today that there’s only so much the government can actually do. “Job creation will ultimately depend on the real job creators: businesses across America,” he said. “But government can help lay the groundwork on which the private sector can better generate jobs, growth, and innovation.”

I’m not sure if this is the best plan, but I’d rather see TARP money focused on creating jobs instead of more bonuses for bank CEOs. What do you think about the President’s plan?