By clicking Sign Up, you agree to our Terms of Use and that you have read our Privacy Policy
Skip to content
BRENDAN SMIALOWSKI/AFP/Getty Image
By Donna M. Owens · Updated October 23, 2020
During the Civil Rights Movement of the 1960s, ‘Freedom Riders’ boarded interstate buses and traveled to the deep South to challenge segregation. More than 50 years later, the Black Voters Matter Fund is motoring by bus through rural Georgia, Mississippi and Florida in what’s billed as “The South Is Rising Tour.” The grassroots effort kicked off last Wednesday with a busload of organizers, activists, partners and journalists. They’ve visited small towns and cities, meeting several Black women mayors, community leaders, clergy, college students, etc. Stops have included the Mississippi Action for Community Education, Inc. (MACE)—one founding board member was Fannie Lou Hamer—and the Emmett Till Museum. The tour wraps this week in Florida, where there’s a primary election on Tuesday; Andrew Gillum, a young, Black candidate is hoping to win the Democratic nomination there for governor. During this historical ride, we recently caught up with LaTosha Brown and Cliff Albright — co-founders of Black Voters Matter — by phone and online from the road. Here’s what they had to say. ESSENCE: Why is this tour important? LaTosha Brown: We believe that we are in a particular moment in our political history that requires us to build upon and expand the organizing practices that have worked for us in both the past and present. Our goal is to support and work with grassroots groups, organizations and networks to help strengthen Black political infrastructure on the ground. The tour is entitled “The South Is Rising” to lift up the many examples and opportunities for Black voters to transform the region and country by supporting progressive policies and candidates in this election cycle. Oftentimes we never hear about the work or progress being led by Black people living in the rural South. It’s as if they are invisible. We wanted to bring attention to the amazing change that is happening all across the South in both urban and rural communities, particularly the Black Belt and Mississippi Delta regions. 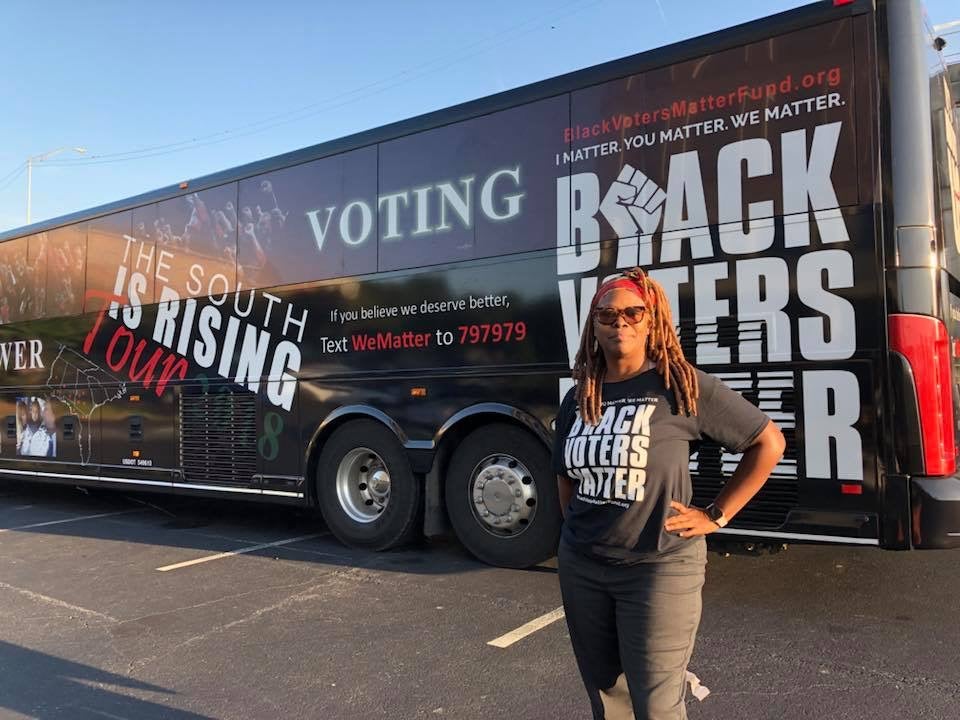 Above: LaTosha Brown strikes a pose during the tour. Courtesy of Black Voters Matter Fund.

ESSENCE: What have you learned while touring the rural south? LaTosha Brown: As a native of Selma, Alabama and a daughter of the rural South, I know how difficult and politically isolating it can be during important elections when you have little resources. People are ready for change and want responsive leadership. We ask every community that we visit about their core issues. Overwhelmingly, the top two concerns have been around public education and healthcare access. Black communities all across the South are concerned about the closing of neighborhood schools, the need for local control and representation on the school boards, and full funding for public education. Cliff Albright: Everywhere we go, the issues that are discussed include education, health care, economic development, voter suppression, etc. We met groups focusing on governance and accountability, LGBT issues, urban agriculture, cultural festivals and much more. In Georgia and Mississippi, several groups spoke about health hardships related to the failure to expand Medicaid in those states. In Terrell County, Georgia, we learned of several recent hospital closings. In one county in the Mississippi Delta, we heard how charter schools are being expanded to the point of drowning out public schools. ESSENCE: Black Voters Matter was among the groups instrumental in Doug Jones winning the Senate race in Alabama, fueled by Black women’s votes and organizations. How does that impact future campaigns? 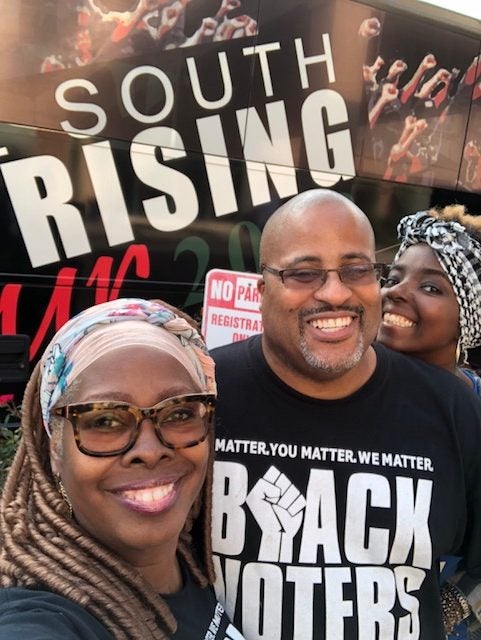 Above: LaTosha Brown and Cliff Albright during the tour. Courtesy of Black Voters Matter Fund.

LB: Black women are on the vanguard of change all across the South. We think what we witnessed in Alabama last December we are going to see in Georgia and Mississippi this fall. Black women from various ages and backgrounds are stepping up and leading in creative and powerful ways. The sisters are handling business! What we have discovered is that people are on fire. People are ready to be organized. ESSENCE: What’s the reaction been to your bus? CA: We have been incredibly surprised and sometimes overwhelmed by the reactions that people are having to our bus. There have been several instances of people crying out of joy and pride when they see the bus. We’ve seen people pull over just to see what the bus is about—gratitude for us being bold enough to drive such a bus through the south. We have seen folks inspired to ask about volunteering. LB: I think the biggest impact is understanding and knowing that people need hope. This is why we spread a message of hope, power and love. Southern people are tired of politics as usual. This is why we center our conversations around power and possibilities. Communities are looking for people with courage and vision. We have had an amazing response to this idea that the South is rising up and standing in our power and love for humanity. We have the audacity to believe we are the ones that will help get this nation back on track by creating a collective vision and electing visionary progressive leadership.