By Breanna Edwards · Updated October 23, 2020
As the nation watched, Dr. Christine Blasey Ford testified before the Senate Judiciary Committee on Thursday, recounting the sexual assault she allegedly suffered at the hands of Supreme Court nominee, Brett Kavanaugh. The judge also addressed Senators, defending himself against the accusations, which date back to their high school days in Bethesda, Maryland.

ESSENCE is here reporting amid thick security and police, hundreds of protesters and hallways lined with media and members of the public. The air is electric with anger. Protestors and supporters of Ford have traveled from across the country to attend the hearing.

Triana Arnold James came all the way from Smyrna, Georgia to make her feelings known. 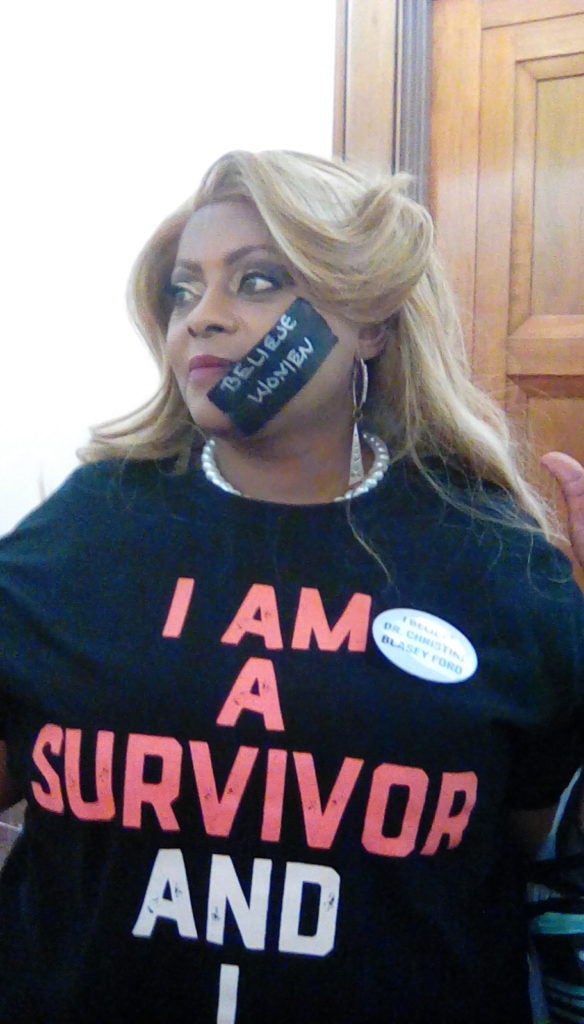 A veteran, wife and mom, she is “standing in solidarity with women who have experienced sexual trauma.”

“When you report it you get labeled and blackballed. I support Dr. Ford,” James said.

During moments of her testimony, Dr. Ford appeared to be visibly shaken while she recalled the night Kavanaugh attacked her. After her testimony she denied that she could have mistaken Kavanugh for anyone else at the party, when Sen. Dianne Feinstein asked if she was sure it was him. “The same way I’m sure I’m talking to you right now. Basic memory functions. And also just the level of norepinephrine and epinephrine in the brain that sort of, as you know, encodes that neurotransmitter encodes memories into the hippocampus so the trauma related experience is locked there where as other details kind of drift,” Ford stated.
“So what you’re telling us is this could not be a case of mistaken identity?” Feinstein asked. “Absolutely not,” Ford said.
This morning’s testimony is expected to last throughout the day, and we will update this post as the day goes on. 10:25 a.m. EST: Ford is once again asked to address the idea of mistaken identity when it comes to Kavanaugh assaulting her by Sen. Patrick Leahy. And once again, she states that she’s sure it was him. -Y.C. 10:30 a.m. EST: The panel will resume after a 15 minute break. -Y.C. 11:50 a.m. EST: Senate Judiciary Committee chairman Chuck Grassley spoke to reporters during the break saying, “I don’t think I can make any comments at all today, maybe it’s something I ought to sleep on. This is pretty important. We ought to be thinking about it a lot and not making hasty comments.” (h/t CNN) -B.E. 11:52 a.m. EST: President Donald Trump, who has firmly stood behind his nominee throughout this whole process, is reportedly watching a delayed version of Ford’s testimony on Air Force One (h/t CNN) Per the White House Travel Pool: Sarah Huckabee Sanders came back to the press cabin during the flight to say that the president was watching Ford’s testimony on AF1 on a bit of a delay. All of the TV’s on the flight your pooler could see were tuned to Fox News’s live coverage of the hearing. POTUS has not spoken to Kavanaugh or Rosenstein today, Sanders said. WH will keep us updated on status of Rosenstein meeting. -B.E. 12:12 p.m. EST:

As Dr. Ford’s testimony resumes, she is being questioned about past therapy, whether she told others about being sexually assaulted and if she willingly took a lie detector test.

“I said absolutely,” she said of the polygraph, noting it still produced anxiety.

Cheers erupted in a public overflow room here on The Hill as a Senator noted that President Trump should see to it that the alleged witness to the sexual assault of Dr. Ford is questioned. Ford said she favored the alleged witness being questioned. She noted the polygraph was administered soon after her grandmother’s funeral. Meanwhile, protests continue outside the hearing, and Black women and their allies are here in notable numbers. Working Families Party National Director Maurice Mitchell joined protesters earlier on the steps of the Supreme Court. He is protesting Kavanaugh’s nomination. “With each hour it’s clearer that Brett Kavanaugh has no place in a courtroom besides a defendant’s chair. But somehow, some senators in both parties are still publicly on the fence,” he said. “That Kavanaugh is still in the running for a Supreme Court seat while black and brown youth across America languish in prison for carrying small amounts of weed is the definition of privilege.” “This isn’t a tough call,” he said. “It’s a moment of reckoning. It’s time for senators to step up and go on record now to say they oppose Kavanaugh’s nomination. This moment — and their constituents — demand nothing less.” There is now a 30 minute recess for lunch. -D.O.

ESSENCE spoke with sources here on Capitol Hill to learn more about Rachel Mitchell, the lawyer chosen to question Ford and Kavanaugh on behalf of the Republican majority at today’s hearing. Mitchell has spent her entire legal career – 26 years – working in the county attorney’s office of Maricopa County, Arizona. She was a law clerk with the county attorney’s office immediately after law school, and she joined the office as a prosecutor in 1993. Mitchell is currently the Deputy County Attorney, and she heads the county’s Special Victim’s Division, which has two bureaus: one for sex crimes, one for family violence. Previously, Mitchell headed the sex-crimes bureau for 12 years. According to sources, Mitchell is taking a leave of absence from Maricopa County in order to work on the Kavanaugh nomination. -D.O. 1:07 p.m. EST: Social media is buzzing with reactions to today’s hearing. Here are a few highlights from Twitter:

Breaking – Here is a group picture of the 13 individuals that made the decision that the FBI should not investigate the claims of Dr. Ford, my client, and other women. pic.twitter.com/GrslQrPjpJ

I believe in due process.

I believe in the evidence.

And based on this absolutely damning testimony against Brett Kavanaugh.

This is CWL. Convenient White Logic. You know the logic the privileged use to support crazy ass theories. https://t.co/TJahvFVQGR

Trump could have picked a number of people to fulfill his agenda. The fact that he is sticking with a fellow sexual predator speaks volumes. #KavanaughHearings

If she were “unattractive” they would use that to say Kavanaugh wouldn’t do that to “an ugly” person.

As SICK as the statement is, those Senators correlating her desirability plays a role in if they believe her. Sick!#KavanaughHearing https://t.co/ciGoUIYMIG

Then Harris asked THAT question. “Do you believe that it’s possible for men to be friends with some women and treat other women badly?” Harris asked the important question that everyone seems to have glossed over. And then for the final ringer, Harris asked Kavanaugh a question that surprisingly, no one else seemed to think to have asked. “Did you watch Dr. Ford’s testimony?” the senator asked. Kavanaugh admitted that he did not. “I was planning to,” he insisted. “But I was preparing mine.” -B.E. 6:45 p.m. EST Kavanaugh’s hearing has come to an end. -B.E. 7:00 p.m. EST President Donald Trump tweeted shortly after Kavanaugh’s hearing ended that the “Senate must vote!” praising Kavanaugh for his “powerful, honest, and riveting” testimony.

Judge Kavanaugh showed America exactly why I nominated him. His testimony was powerful, honest, and riveting. Democrats’ search and destroy strategy is disgraceful and this process has been a total sham and effort to delay, obstruct, and resist. The Senate must vote!