By Yesha Callahan · Updated October 23, 2020
When people think of Amber Rose, a lot of times they associate her with two men she was in public relationships with. Rose has had songs written about her, rumors circulated and has been slut shamed, but despite what anyone may think of her, she seems to rise above it. And now, as an outspoken activist when it comes to women empowerment, Rose is doing her best to encourage people to vote. This year, Rose and her annual Amber Rose SlutWalk, which takes place on Saturday, October 6 in Los Angeles, partnered with Hip Hop Caucus’ Respect My Vote! campaign to mobilize women and everyone who cares about women to the polls. “I am committed to ending rape culture and slut shaming and empowering women with the freedom to be who they want to be and achieve what they want to achieve,” said Rose. “We are working to change the culture, but we also have to change our laws to fully protect women from harassment, get justice for violence against women, and ensure equal opportunity for women at work and in school. That is why activism is the theme of SlutWalk this year. We are going to exercise our activism by voting. I am excited to partner with Hip Hop Caucus on the ‘Respect My Vote!’ campaign. We are going from the poles to the polls!” In an exclusive interview with ESSENCE, Rose delved deeper into the issues that she feel are important to her, and why people need to get out and vote. This interview was edited for brevity. ESSENCE: How did you get started with Respect My Vote! and the Hip Hop Caucus? Amber Rose: When it came to a presidential vote, I would vote. Anything else, I would be like ‘I don’t really know about judges and mayors’. I really wasn’t into it, but then I realized becoming a feminist and starting my SlutWalk, that voting on all levels is important, and I wanted to have Respect My Vote! at the SlutWalk, so they can educate other people. At the SlutWalk, we’re going to have voter registration, and there will be a table manned by people who can teach people why voting is important. ESSENCE: The SlutWalk is now in its fourth year and it’s evolved over the last couple of years. When it first started people had an issue with the name. How did you combat that? A.R.: If people are more offended by the name, than what we actually do, there’s a problem. They didn’t want to do any research. The first year it was extremely grassroots and I had to ask my rich friends for money to get it off the ground. And I still deal with the issues, even from other famous people. I just direct them to the website and tell them to do their research and learn about the work I do with women. I do a million interviews and I spread the word. But I’m only one person, so there’s only so much I can do. 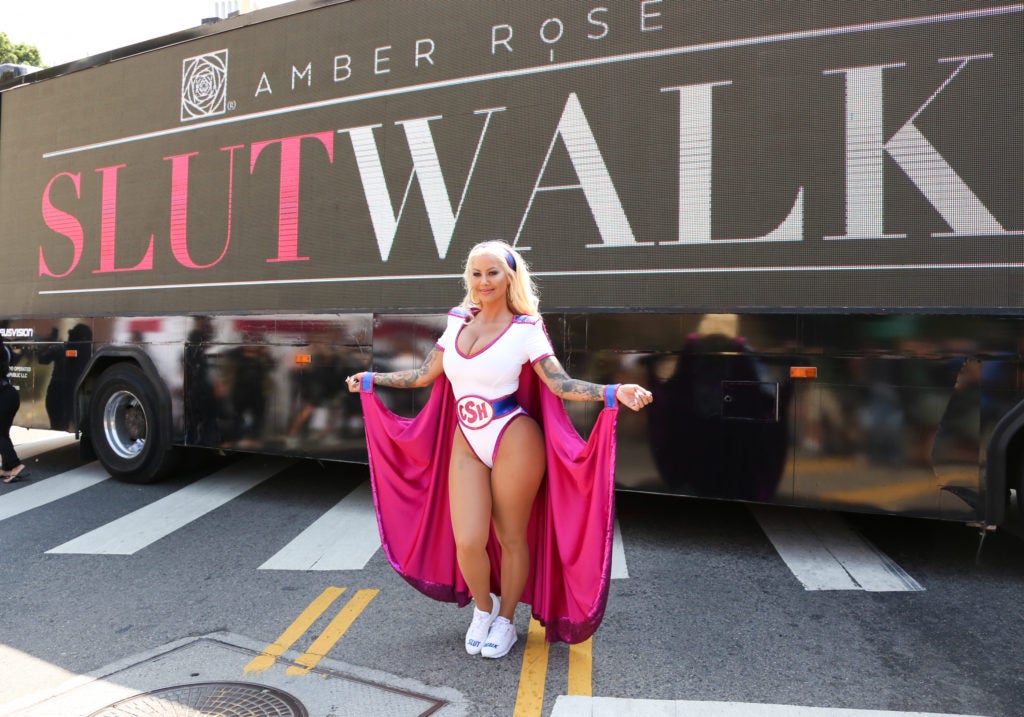 ESSENCE: What made you want to actually start your own SlutWalk? A.R.: There are SlutWalks all over the world. From Canada to Germany, they’re all over. What I was personally dealing with was a lot of slut shaming on the internet. It was kind of funny to me. I came into the industry dating one person, that didn’t work out after two years. Then a year goes by, and I meet the man who became my husband. And then I was the biggest ho ever, and I’m like how? I feel like at that time I was explaining myself. There are YouTube videos of all of these men I was supposedly associated with and half of them I don’t know. It wasn’t fair, and I had to deal with that extreme form of bullying everyday. I didn’t know what slut shaming was. Then when me and my ex-husband got a divorce, it was automatically my fault. And no one knew what happened in our marriage. People were like, ‘You shoulda never married a ho’. That’s why I started doing my research about what a SlutWalk was. The initial things were slut shaming, victim blaming and double standards. Then we incorporated the LGBTQ community, because they’re constantly raped and victimized. Then I incorporated non-binary. So it wasn’t just a women’s movement after the first year, because I realized I wasn’t alone. ESSENCE: What events and performers will be at this year’s SlutWalk? A.R.: We have Sweety performing, Spice, she’s from Jamaica and does dancehall, and Lil Uzi. We’re having vendors like Respect My Vote!. We make it a fun event, even though the subject is very heavy. We want it to be a celebration for women. But in the midst, we drop gems, we have speakers, poets and panels. You’re not just crying all day. We sprinkle a little fun in it. ESSENCE: With Respect My Vote! you listed 10 reasons why it’s important to vote. What’s the most important reason to you? A.R.: I would say for the most part realizing that we have a voice and that we have to do the lower tier voting. It’s not just about the president, because they f-cked that up. When it comes to this last election, I feel like a lot of people didn’t want to vote for Hillary and decided not to vote at all. And of course all of those other people voted for Trump. I was shocked about the white women. Because you’re still a woman. I feel they were manipulated by their white husbands. ESSENCE: What’s your definition of feminism? A.R.: Equality. Just know that I’m just as smart as you, if not smarter. Just because I was a stripper doesn’t mean I don’t know what I’m talking about. Just because I’m sexually liberated and believe in body positivity, doesn’t mean I’m a disgusting person. ESSENCE: Violence against women is always a big point of focus of the SlutWalk. Will you be speaking about that this year? A.R.: I feel like every year, I do a speech, and I feel like I’m learning a lot. I have speakers there that will not only teach people there, but also teach me. I’m going to talk about everything that’s going on right now with men in power. Men in power are such predators because they know a lot of women aren’t going to say anything. They can threaten someone’s life, and be like ‘I dare you’. The’ll say also say, ‘The entire world will go against you because no one will believe you because I’m so loved by the people’. And you know, people will always rush to defend them. ESSENCE: What is your goal for this year’s walk? What do you want to resonate with people? A.R.: I feel like it’s pretty much the same every year, but we get more people showing up. I love when people just come, because their friend brought them, and their life is changed forever. I brought my male friend to a women’s conference the other day, and he knows that I’m a feminist, he left saying that he looks at life so differently. To hear those stories make me feel like I’m making a difference. Even if it’s only 3 people. Then people will go on with their lives treating people different. They understand why women wait so long, why they’re scared to speak out. To learn more about Amber Rose’s SlutWalk click here.
TOPICS:  Amber Rose respect my vote Slutwalk