By Malaika Jabali · Updated October 26, 2020
A disturbing photo of a 4-year old girl in Missouri appears to show her duct taped to a chair at her daycare center, setting off a call from her parents for a thorough investigation. As WBRC reports, Elysha Brooks and Christian Evans only found out about the incident after a representative from the Department of Children and Family Services sent them a picture of their daughter, which someone captioned “Thought I was playing.” According to the father, their young daughter appeared anxious and scared. “Knowing for one that you’re not there protect them and knowing for two that you have people around that would stoop to that level to hurt your child puts you in a crazy mind state,” Evans said. 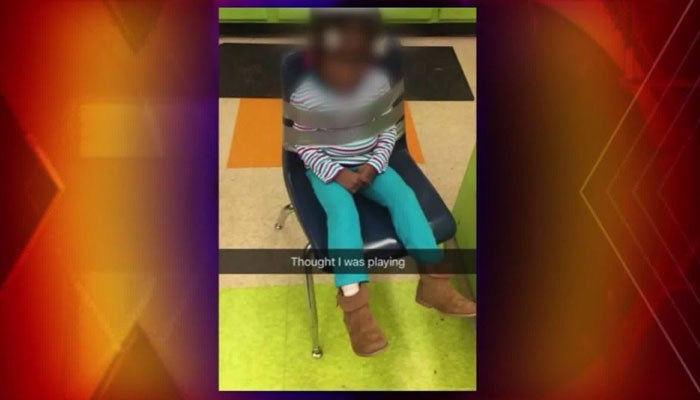 Brooks says the daycare never contacted her or her family to tell them something was wrong. The daycare, which is believed to be Little Learners of Florissant, did not respond to attempts to contact them regarding the allegation that one of their employees is responsible, according to WBRC. In the wake of her family’s situation, Brooks warns “double check on these daycares before you go to them because I thought my daughter was safe.”