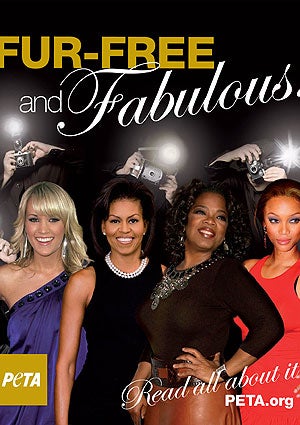 Last month, the three most high-profile and fabulous African-American women, Tyra Banks, Oprah Winfrey and the First Lady Michelle Obama, were turned into very public postergirls for PETA, each vowing to turn their backs on fur forever. While there have been African-American celebrities–Nia Long, Persia White, Dennis Rodman and most recently, Mario–who’ve shunned fur in the name of PETA, this latest campaign features some serious heavyweights in our community that can seriously affect the way in which we look at fur and the inhumane treatment of animals or at the very least, spark some dialogue on the rarely discussed subject.

To fur or not to fur, let’s admit, hasn’t been a question at the top of most African-Americans’  radar. For Black folks, fur has a longstanding tradition of embodying wealth and glamour from the Harlem renaissance to the 70’s Blaxploitation flicks to the present day over-indulgent hip-hop jet set. Climbing up the ladder of success usually involves flaunting your riches with a fur or two for many of us.

The reason a great number of us aren’t really phased by the cruelty of fur could have to do with the fact that we’ve got our hands full with racism, police brutality, domestic abuse, gun violence, and AIDS, to even think twice about the well-being of an endangered animal. Although, a small number of African-American celebrities have spoken out against cruelty to animals, Nia Long has gone so far as saying: “There’s no difference, in my opinion, [between fur and] slavery or the Holocaust. It’s just that we’re not dealing with human beings, we’re dealing with animals, but it’s still a living thing.”

It’s fair to say we can all agree that these animals do suffer for their fur, 40 million a year to be exact. And while I can remember as a teen being totally horrified by the brochures and videos depicting the skinning and drowning of animals for their fur, there are those of you, including myself, who would vehemently disagree with such a comparison. In fact, most African-American women who choose to keep it faux don’t lose their marbles at the site of Rihanna or Mary J. Blige swathed in fur.

PETA’s 2005 controversial campaign comparing a Black man being lynched to the cruelty of the fur trade didn’t exactly engage the Black audience. Yet, PETA’s latest cover girls are significant to changing the perception of fur in our community, and is a radically new approach. No shocking images of torture or controversial vows to go naked were needed, just Oprah, Tyra and Michelle Obama making a seemingly quiet statement against fur by redefining glamour. Oprah has long refused to not only to not wear but feature fur in O Magazine, Tyra first renounced fur 15 years ago when she modeled a faux-fur hat, complete with a “no fur” button, for PETA. Michelle Obama, as our First Lady, is the most profound endorsement in the advertisement. During the inauguration, many wondered why the First Lady wasn’t keeping warm in a long mink in a crowd of distinguished woman in furs. Even Jay-Z was sporting a crown of silver fox on his head on the historical day.

With Michelle Obama, Oprah and Tyra leading the way perhaps other high-profile celebrities and fans alike will consider a fur-free wardrobe for 2010.