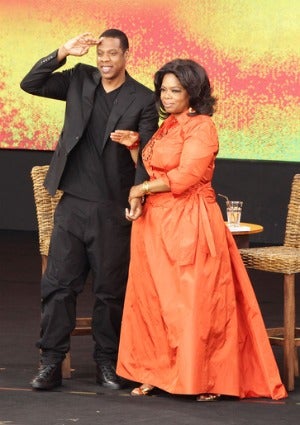 It looks like Oprah is changing her mind about hip-hop – or at least warming up to rap moguls like Jay-z. The daytime television queen, who once refused to host any rapper on her show, said she’s recently “opened” her mind to rap with the help of her newest friend and recent network guest Mr. Shawn Carter.

In previous years, Oprah has expressed a personal disdain for rap music and its vile use of the n-word, h-word, b-word, and every other ear-puncturing insult alike. Yet, when the launch of her million-dollar network rolled around on January 1st, Oprah chose to kick off her Master’s Class biography series with an investigative look into the life of guess who?

Yes, Jay-Z “It’s the Roc” Shawn Carter. So why the sudden change of heart?

Oprah makes it clear that she still doesn’t respect foul-mouthing or misogyny in rap music but definitely respects Jigga man.

“He hasn’t changed my mind about rap, he has opened my mind,” Winfrey told EurWeb.  “What we did on our show was agree to disagree. I still have my opinion about the N-word, and he still has his.  I can see his point of view and he can see mine. I mean, I would say he’s become a really good friend of mine because of that. We agree to disagree.”

The new network pioneer interviewed Jay-z on her exclusive talk show, invited the rapper to her big Australian adventure, and featured his book, “Decoded, as part of her frenzied “Favorite Things” giveaway.

“His book is fantastic,” she added. “There’s a thing in his book where he talks about rappers are trying to tell stories that the rest of the world doesn’t want to hear. And I realized that I was closed to wanting to hear it. So the difference is I’m now open to hearing it.”

What do you think of Oprah’s new-found friendship with Jay-Z – a good celebrity bond or hypocritical?