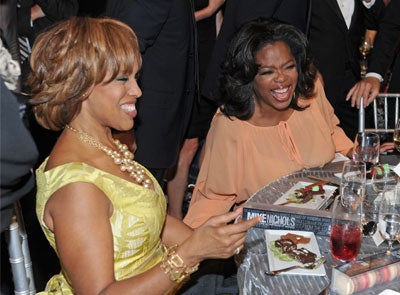 There is so much well-deserved hoopla surrounding the Queen of Daytime’s retirement from the “Oprah Winfrey Show.” Everyone and everything that Oprah touched, endorsed or otherwise had a relationship with has come back into the spotlight. And that includes her friendship with her bestie, Gayle King.

I was watching “Nightline” on Wednesday night, where Cynthia McFadden interviewed Gayle. During the segment, Cynthia wanted the audience to get to know the woman that even Wikipedia describes as “the best friend of Oprah Winfrey.” She talked to Gayle about the meaning of her friendship with Oprah, her personal and professional life, and inquired as to whether she is, in fact, ever jealous of Oprah.

Cynthia delved into Gayle’s life and psyche, and seemed almost incredulous that Gayle is nonplussed by being described as “Oprah’s best friend.” Gayle is comfortable with that definition because, as she said, that is how most people got to know her. But Gayle is also her own woman; talented, smart and has all those “best friend” qualities that a girl’s girl wants in her girlfriend. She is never jealous of Oprah because, as she noted, you can only be jealous if you are not comfortable with your own life. Gayle is clearly comfortable in hers.

When Gayle and Oprah met at a news station over 35 years ago, Gayle already had those qualities that her soul could offer as a friend. She was comfortable, happy and secure in her own life, which is the soul’s prime time for forming adult friendships. As Oprah’s star rose, Gayle was there to celebrate and share in Oprah’s successes, and Gayle’s prominence naturally and organically rose along with it. She isn’t Oprah’s handpuppet, and she doesn’t “stand in Oprah’s shadow.” Rather, she noted, that she is that friend who actually “stands in her light.”

As we maneuver through life’s maze to reach our true potential, we meet people along our journey who become part of that inner sanctum of true friendship. Clearly those girlfriends who show up along the way at divinely appointed times are simply the Universe responding to our soul’s request. John O’Donohue describes these friends who “were once strangers that somehow at a particular time, came from a distance toward your life. Their arrival seemed so accidental and contingent. Now your life is unimaginable without them.” Yes, we should all be so lucky as to have that bestie who is there to share life’s adventures with you. Gayle and Oprah have that, and I for one, applaud and support that.

As a girl’s girl, I understand the need and desire for real female friendships. I have always had a gaggle of true friends formed throughout my life, from grammar school until now, who are so instrumental in my life that I cannot imagine it without them. We’ve shared life’s journey; we’ve travelled together, cried together, shared marriages, divorces, and kids’ birthdays together. I live for those moments and friendships which nourish my soul.

In Oprah’s case, as a girl from a broken home and a sexually abusive childhood, one can understand her soul’s need for a Gayle. Oprah has the comfort of knowing that Gayle will always be there for her, unlike her own mother; and what a great comfort for the world’s most powerful woman to know that she will never face betrayal at the hand of a faux friend, which is more than most of us, including myself, can say.

I have had my share of friendships that have gone south. And even though I recognize that people come into your life for a reason, season or a lifetime, and these friendships end as adults, it still doesn’t mitigate the pain I felt from the betrayal at the hand of those “friendships.” Oprah has that security in Gayle. Can you imagine how that must feel? Even with all her money and fame, Oprah couldn’t buy that security; you can’t put a price on loyalty.

While I was on the phone the other night, a guy mistakenly noted that, because of my schedule, I must not have much time to spend with my girlfriends. “No, actually I see my girls at least 3 or 4 times a week,” I offered. He seemed pretty astounded. In fact, I had just had a girls’ night the night before with Bevy and Jules at Houston’s, which followed a weekend of activities cavorting around the Big Apple, from parties to church, with Bevy, Jules, Angelique, and a few other of my girls at one point or another. I am blessed to have them, as well as my girls Tracey and Crystal who go back over 20 years, and a few other girls and close guy friends here in New York, that round out my friendship circle. I consider myself blessed and highly favored in the friendship arena.

Real friendships add to your life’s blessings. You know that you are never alone and your friends are always there to offer their unwavering love and support. If you are fortunate enough in life to have such friendships, it should be easy to understand Gayle and Oprah’s friendship as opposed to casting aspersions on such an organic relationship. Muhammad Ali noted that “friendship is the hardest thing in the world to explain. It’s not something you learn in school. But if you haven’t learned the meaning of friendship, you really haven’t learned anything at all.” This is sad but true for many people, and I only hope everyone can find their own “Gayles,” because I can say from first-hand experience that life just isn’t the same without your girls.